In 2006, tech billionaire-turned-hotel magnate Alexander Vik set out to create one of the greatest wines and wine retreats in the world. It was a lofty mission. But just a little over a decade later, Viña Vik stands as a testament to what can be accomplished with a grand vision (and a lot of money). From the outstanding VIK wine to the intoxicating experience of the stunning winery and lavish resort, Viña Vik is truly a wine-lover’s paradise. 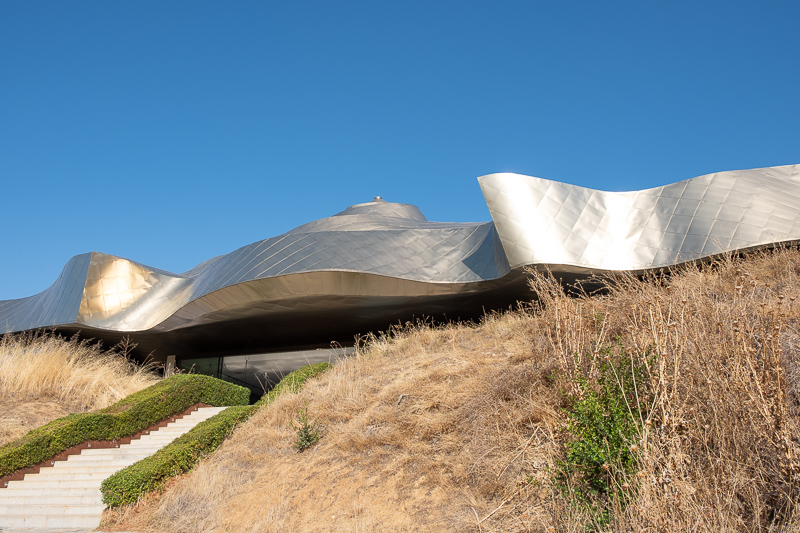 Nestled deep within the Millahue Valley in central Chile, Viña Vik is a winery and retreat that was built out of a passion for fine wine, contemporary art and uncompromised experience.

To turn vision into reality, Alexander and his wife Carrie brought in some of the best talent they could find — starting with a 22-person team of geologists, viticulturalists and oenologists who were hired to help find the perfect South American site for their soon-to-be world class operation. The Viks also employed two of Chile’s most respected architects (one for the bodega and one for the retreat — because of course you need two world-renowned architects), a handful of sought-after artists, a well-known French wine consultant and an acclaimed Chilean vigneron.

The all-star team paid off. 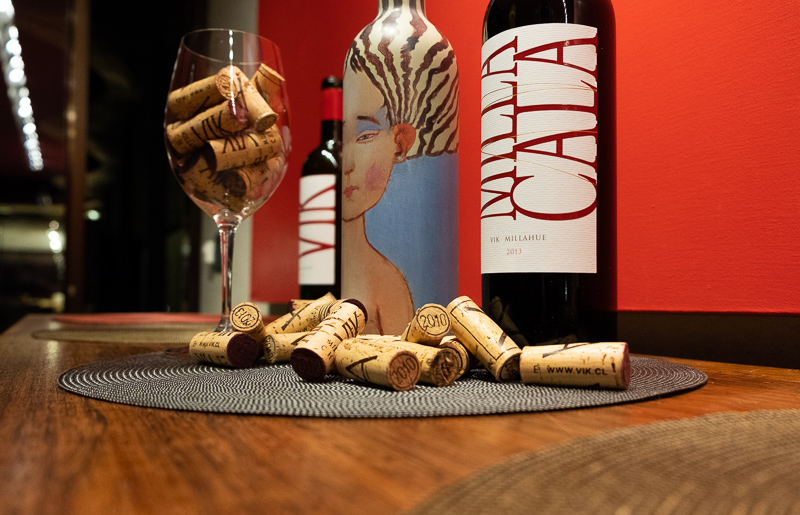 I was first introduced to Viña Vik’s wines about two years ago at a trade tasting in Boston. I found their flagship Bordeaux blend, “VIK,” amongst a sea of expensive Napa Cabs, Burgundies and Bordeaux wines and was captivated at first sip.

When making my Chile travel plans earlier this year, I reached out to Viña Vik to see about visiting their property, about two hours south of Santiago. I was curious. Beyond the delicious wine that I had tasted, I had seen photos of their winery and retreat on the web, and it looked stunning.

But photos don’t do this place justice. 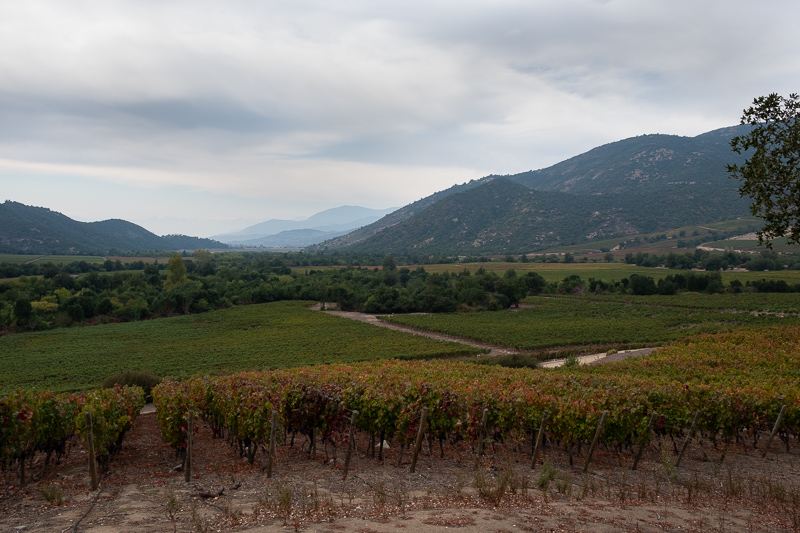 My journey to Millahue started in the town of Santa Cruz, in the heart of Colchagua Valley — one of Chile’s premier wine regions. It was April and harvest in the Southern Hemisphere was well underway.

Colchagua is about as close as South America gets to Napa Valley. It’s a more rural setting — perhaps what Napa was like 60 years ago — but it has the rolling hills, the big Cabernets, the famous wineries, the ripe fruit and the incredible vistas. If opulent red wine is your thing, this is the place to be.

While Viña Vik isn’t in Colchagua Valley, it’s very close. In fact, looking at a map, you’d think it’d be only about 20 minutes to get from Santa Cruz to Millahue. But as I learned the hard way, there is a mountain that separates one from the other, and you have to drive around it to get to Viña Vik. 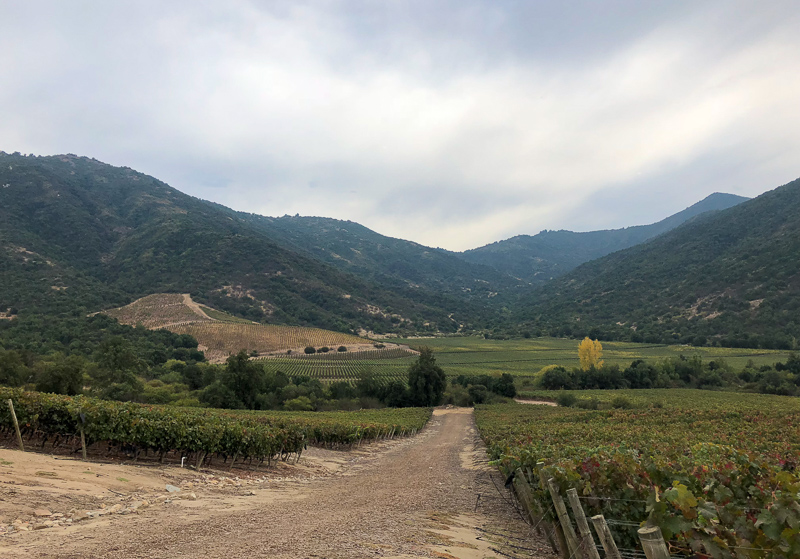 Given the impenetrable divide, the drive wound up taking me about an hour. It’s a pretty ride through quiet rural towns and Chilean countryside. By the time I pulled up to the large wooden gate at the entrance to Viña Vik, I hardly noticed I’d made almost an entire loop around a mountain.

Behind the gate, a dirt road wove through fields of vines, and a large bronze-roofed structure shimmered on a hilltop up ahead. In the distance I could just make out the snow-capped peaks of the Andes Mountains behind the fog on the horizon.

The winding dirt road eventually led me to the winery, which from afar just appeared as a white tented structure, but from up close revealed one of the most incredible winery entrances I’ve ever seen. I stopped to take it all in. 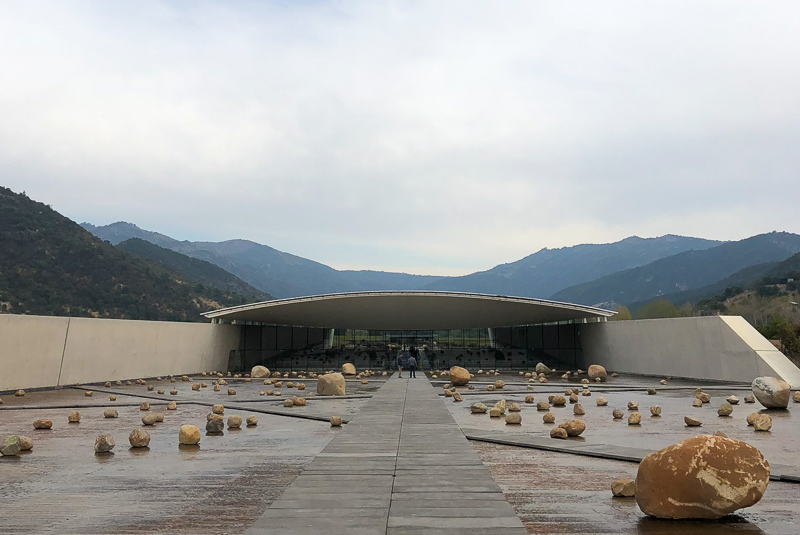 In front of the winery an expansive water feature/art installation swept across a huge flat surface taking up my entire field of vision. Large boulders and rocks, which I later learned represented the diversity of the surrounding vineyard, were scattered across the water. To the right, a beautiful glassed-in winery screamed of modernity, while to the left the water appeared to drift off into the vineyards and mountains beyond. 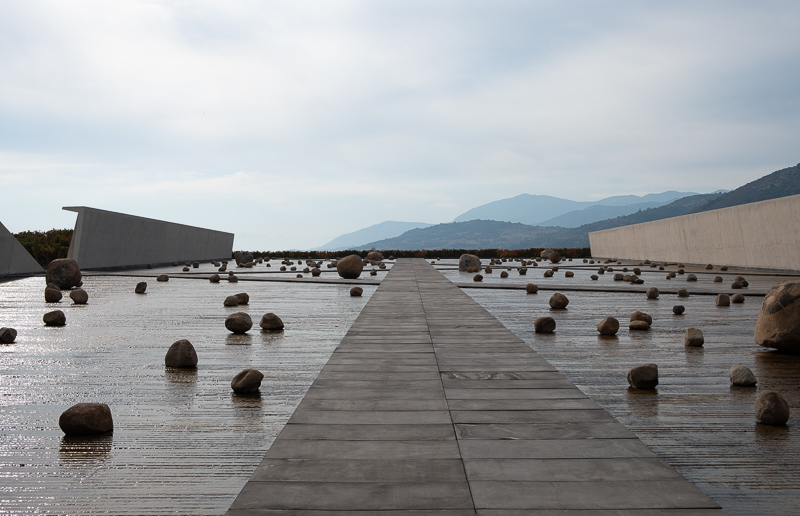 Inside the winery, harvest operations were afoot. I met head winemaker Cristián Vallejo who was kind enough to take time out of his busy day to show me around. The winery is one large room on multiple floors that houses glistening tanks, winemaking equipment and an expansive tented roof overhead. It was an impressive sight and architecturally stunning — a modernist’s shrine in the middle of Chilean no-man’s-land. At the end of the great room we came to a large, sliding wooden door, which I had barely noticed as we approached.

Vallejo told me that the winery was designed with specific features that would force the guest’s perspective to shift. As the door slid open to reveal a dark, intimately serene room, it became very clear what he meant.

Behind the door, barrels sat in tranquility, cut off from the busy operations of the large winery behind. We made our way down an aisle of VIK barrels towards a glowing back wall that emerged from the darkness. It was covered in floor to ceiling art and lead into another, darker passageway that felt as if it had been chiseled out of the wall like an escape tunnel. 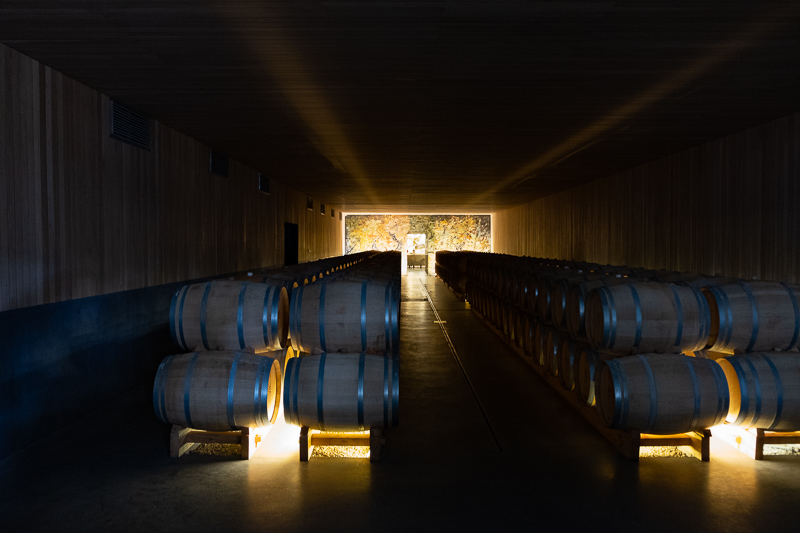 On the other side we emerged into a cavernous room with a golden structure that glimmered on the back wall. I thought to myself, if Zeus and Picasso were to create the ideal wine tasting room in their collective vision, this might just be the place.

I sat down with Vallejo for a tasting. 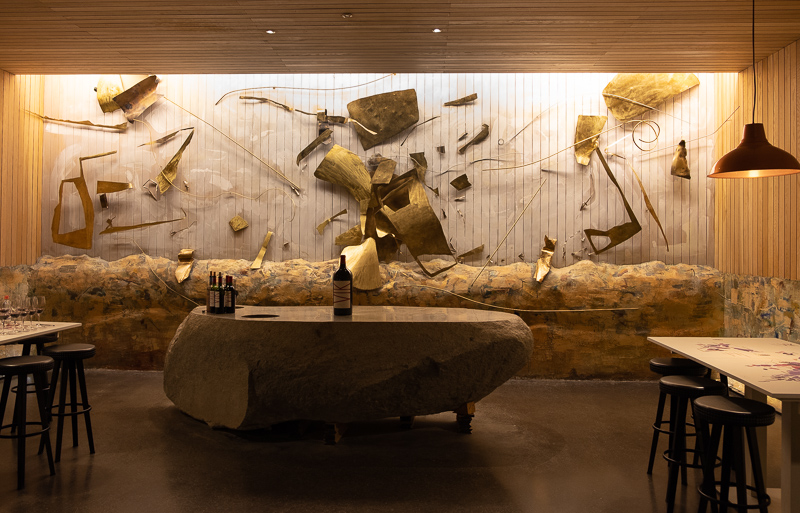 Viña Vik has three wines in their portfolio: their flagship VIK which I had tasted several years prior, along with a second label Milla Cala and a brand new wine La Piu Belle. All of the wines are red blends that draw from the diversity of the vineyard — a vineyard that grows five grape varietals across six valleys, 12 microclimates, and 13 types of soil. Cristián has the challenge every year of choosing the right components to create three distinct wines.

The namesake, VIK, is sourced from the best grapes in the vineyard. To date, the Vik’s have about 1,000 of 11,000 acres planted to vine, and many of the grapes for the VIK blend come from the older plantings and the hillside plots. While the components change every year, it remains a Cabernet Sauvignon/Cabernet Franc-dominant wine. 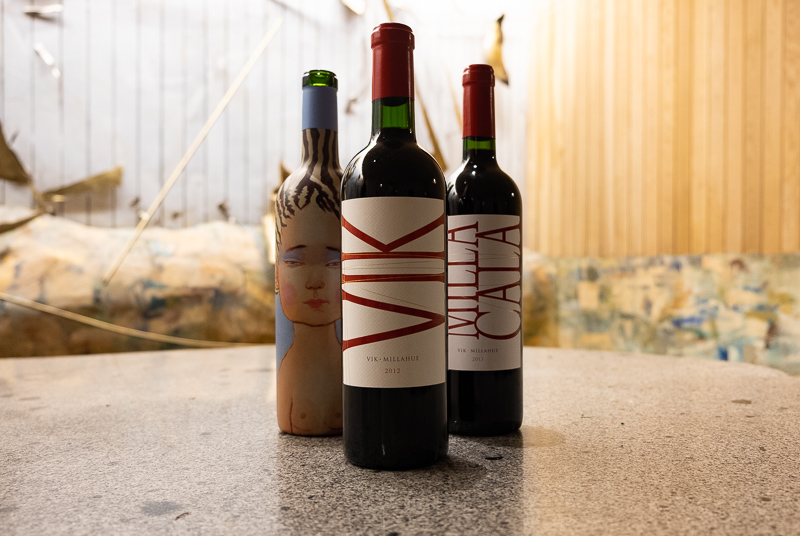 VIK is about finesse and harmony. It doesn’t try to impress with brute strength; instead it intrigues you by revealing silky, expressive layers. It has old world charm with new world fruit; elegant tannins with structure and body, but it’s not heavy. All of the different micro-terroirs that are present in the vineyard are showcased in this wine and the end result is something that is truly luxurious and beguiling.

La Piu Belle, the newest addition to the Vik’s portfolio, debuted in 2017. It’s more new world in style than the other two wines, and has more influence from Carmenere and Syrah. Like the flagship, it has a velvety mouthfeel, but it’s less layered and more focused on showcasing the beautiful, rich and concentrated new world fruit. The wine also comes in a stunning bottle, covered from neck to bottom in art. 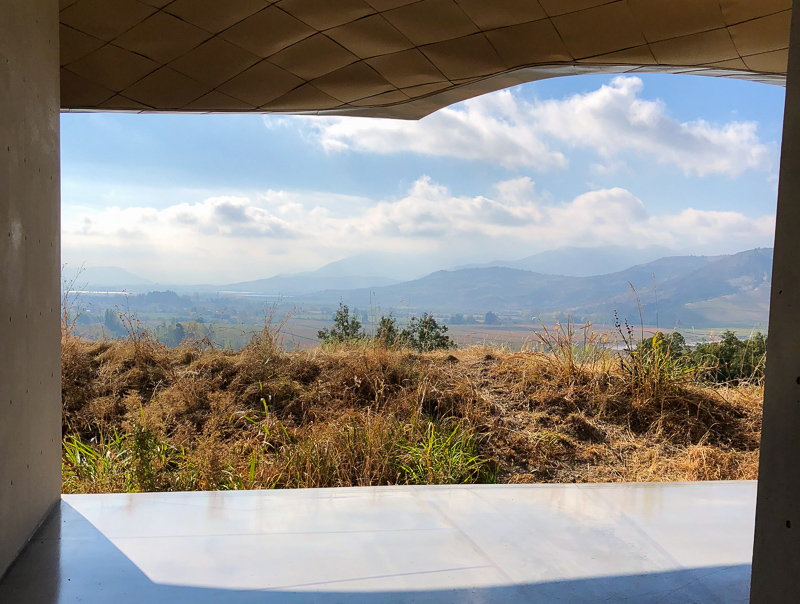 If my visit had ended with the tasting, I would have been beyond satisfied. But at Viña Vik, the wine is just one component of the experience. The retreat is where you truly get immersed in the full vision that Alexander Vik set out to create a dozen years prior.

We jumped back in the car and continued up the winding vineyard path until we reached the crest of a hill, where the bronze-roofed structure came into full view. There we found the retreat, which offered a breathtaking 360-degree view of the entire property, including the winery down below and a lake (partially dried up from the summer months) just behind the hotel. From atop the hill, I was able to get a glimpse of the Carmenere vines which had turned a flaming red in their ripeness. 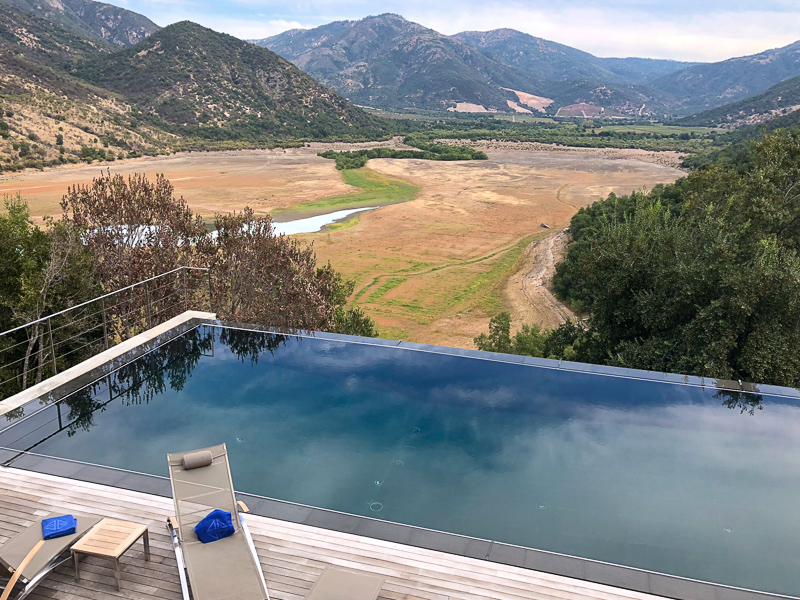 The Viks worked with Uruguayan architect Marcelo Daglio to build the retreat, creating something that is unapologetically grand, but also unique, contemporary and oozing with artistic expression. It’s a feast for the the senses with beautiful views everywhere you turn, whether its that of the natural surroundings, the art or the architecture. 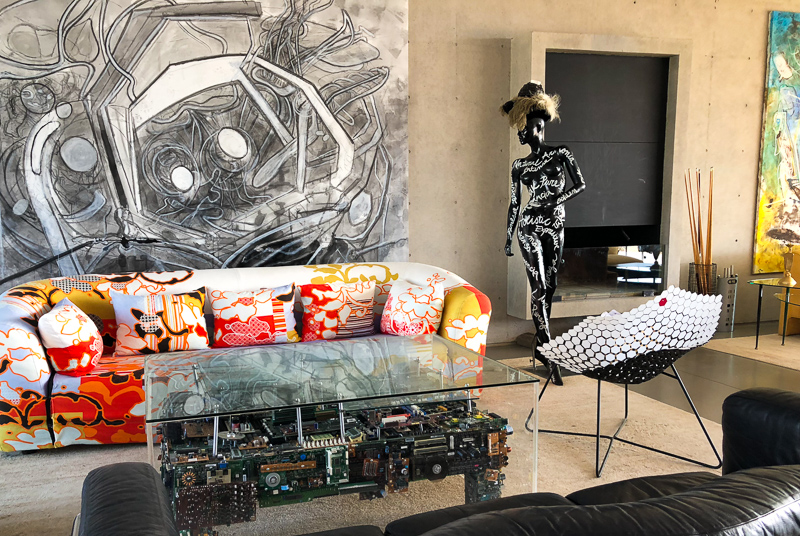 To ease into the experience, I was treated to an indulgent three-course lunch, served with pours of La Piu Belle. I decided to take lunch on the outdoor restaurant deck which overlooked an immaculate infinity pool and tranquil views of the vineyard and property. It’s a view that was clearly created to make people on Instagram jealous. 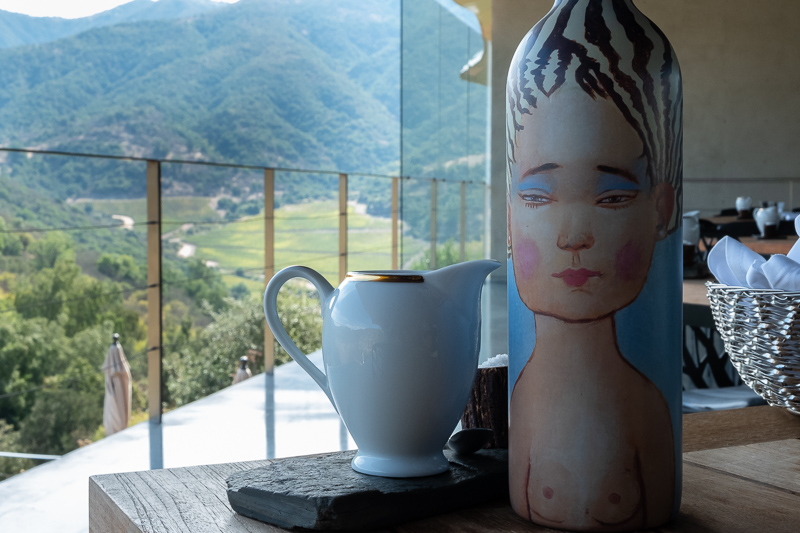 After lunch, feeling rather incredible about everything in life (thanks to some of the best french fries and “ceviche” lentils I’ve ever had), I checked into my room and took in my new, slightly surreal, surroundings. The retreat has 22 guest accommodations, each created by an artist to be completely different than the next. My room was designed by the artist who painted the original work of art that adorns the La Piu Belle bottle, and I can safely say that I have never seen any hotel room like it. It’s luxury, but luxury with a whole lot of soul and a sense of creative wonder and artistic playfulness.

The floor to ceiling windows that looked out on the vineyard were a nice treat as well. 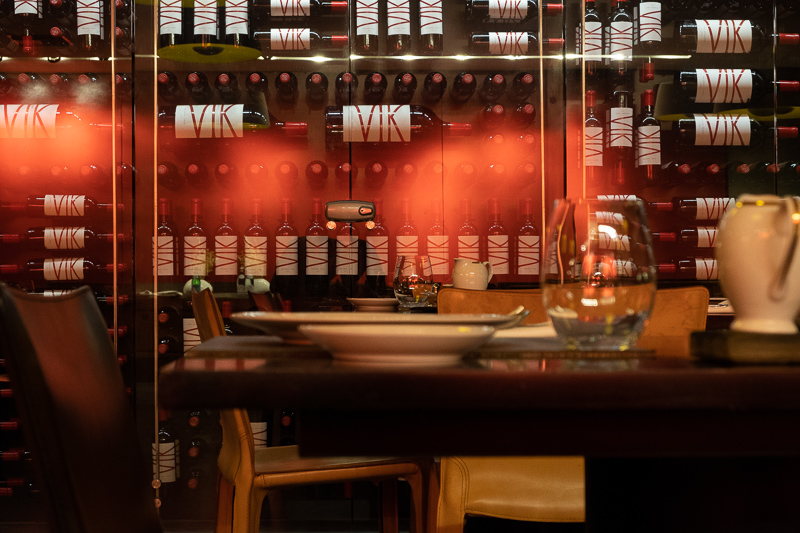 Dinner was served in the same manner as lunch – three courses, expertly prepared by the kitchen staff using local ingredients. It was delicious food — some of the best I had throughout my Chilean travels. The staff was engaging, welcoming and full of advice for guests. Milla Calla and VIK were readily available throughout dinner service and however great I thought the wine was earlier, in this context and with this meal, the wine became even more exceptional.

So they tell me, this is everyday at Viña Vik. 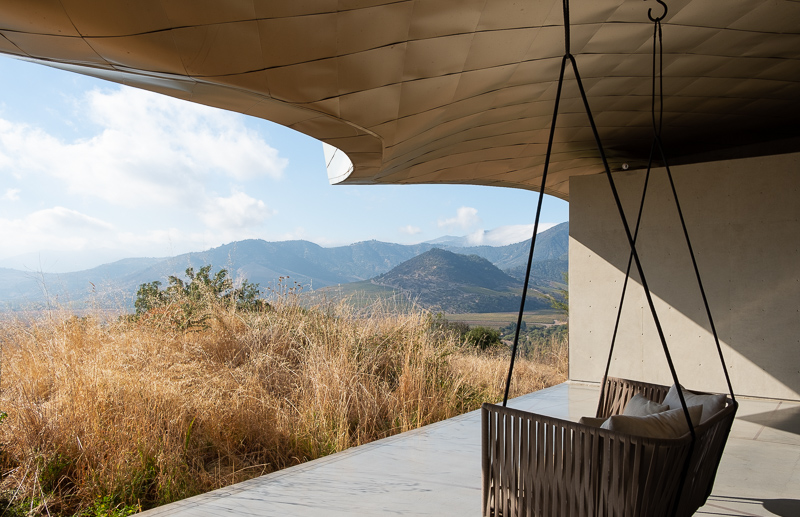 Morning came and I walked out onto the front porch of the retreat with a Cortado in hand. The early morning fog swept through the hills as the sunlight pierced through the cool autumn air. I sat down on one of the swings hanging from the roof to think about the prior day’s experience — the food, the wine, the art and architecture — it all comes rushing back to me. This place truly is a wine-lover’s paradise.

If you are planning a trip to Chile and love wine, food art and relaxation, don’t miss out on the Viña Vik experience. And even if you don’t have plans to visit South America anytime soon, keep your eyes peeled for Viña Vik’s wines. You’ll be treated to a truly decadent experience.

A big thank you to Courtney at MCC, and Gaston and the fantastic team at Viña Vik.