How to Store Wine, Whisky and Beer: An Easy Guide

If you’re going to spend money on good wine, whisky and beer, it’d be in your best interest to take some time to learn about proper storage.

There are many reasons for storing and aging drinks. To start, well-made drinks can change over time–in many cases growing more complex and enjoyable with age. And it’s not just wine that ages well. There are also a number of beer styles–like Barleywine’s and Imperial Stouts–that can improve over time. Another reason for holding onto drinks is for value. Limited production whiskies, for instance, can sell out quickly and become prized possessions in a matter of months. So, as long as you store your drinks properly, and don’t age them past their prime, drinks have the capacity to become more valuable the longer you hold onto them. 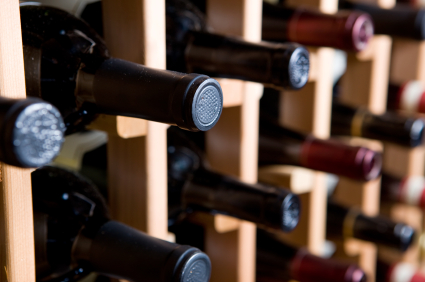 Also check out our article on investing in a wine storage facility here.

Keep your drinks at a steady, proper temperature
Variations in temperature are not good for drinks. Neither are temperature extremes or places with constant warmth. So, do your drinks a favor and find a nice, cool place that can house them for an extended period of time. A temperature controlled cellar is ideal; but when the ideal isn’t feasible closets, cupboards and shelf space in a reasonably cool, temperature neutral area can do the trick for most drinks. That said, when you’re getting into long-term storage and are looking to properly age expensive drinks, you should consider a definitive solution to the temperature issue.

Here is a quick rundown of optimal storage temperatures:

Drinks don’t like sunlight
Whisky, wine and beer have a few things in common when it comes to proper storage. Dislike of direct sunlight is one of them. For wine, UV light rays can destroy the tannins, which in turn can speed up oxidation. The effects of sunlight on beer are similar. The end result is known to the common man as a skunked beer. Although whisky is the least finicky of the three, repeat sunlight will damage a whisky and may negatively effect the taste over time.

To stand or not to stand
Wine does best stored on its side. The primary reason for this is that corks have a tendency to dry over time, and when a wine is lying down the liquid will keep the cork moist. Storing wines on their side can also help slow oxidation, which makes this point applicable to screw top wine as well. One major exception to this rule is Champagne, which–along with other sparkling wines–tend to age better if they are kept upright.

What is true for wine, is quite the opposite for whisky. If you were to lie a whisky down, the high alcohol in the liquid would eat at the cork, and may in turn taint the taste of the spirit. Therefore, always keep your whiskies upright. Similary, most agree that beer should also be stood upright. Beer Advocate has a pretty lengthy argument to support this claim, but in summary: cork issues won’t be a major issue with beer, long storage of a beer on its side can create a yeast ring inside the bottle (which will not settle) and upright storage will decrease oxidation.

So there you have it. Keep your wine lying down and your beer and whisky standing up.

One final note on properly storing whisky. Whisky, unlike beer and wine, can last quite some time after it is opened. That said, an opened bottle will not last forever. Once a bottle is under half full, it is recommended that the whisky be consumed within a few years. At only a quarter full, you may want to consider inviting some friends over to polish that sucker off. Many whisky professionals will suggest that 3-4 months is about as long as a quarter-full (or less) bottle will last without starting to loose some of its essence. That said, I’ve had quarter-full bottles of whisky open much longer than that and they don’t always diminish that fast.

If you’re like me and want to keep buying more and more drinks to fill up every shelf and corner in your house, keep these tips in mind. They’ll save you from losing out on tasting some finely aged drinks in the long run.