I’ve said this before and I’ll say it again, there aren’t enough good whisk(e)y events in the US – especially here in New England.

The closest WhiskyFest is in New York. Kentucky Bourbon Festival is in, well, Kentucky. Okay, we do have The Single Malt & Scotch Whisky Extravaganza which is a terrific event (check out their website for this year’s schedule – coming to Boston on October 11). And, yes, there is the Whisky Guild Classic, if you don’t mind doing your tasting on water. But, other than that, we’re talking small tastings at retailers and an occasional whisky dinner or Master Class (thank you, Federal Wine & Spirits).

But we do have something else, hidden up our sleeve, which perhaps you can be a little jealous of. We have Julio’s Liquors, in Westborough, MA – home of the Loch & K(e)y whiskey club, Whisk(e)y Wednesday’s and of course, the reason I am writing this post, Go Whisk(e)y weekend. 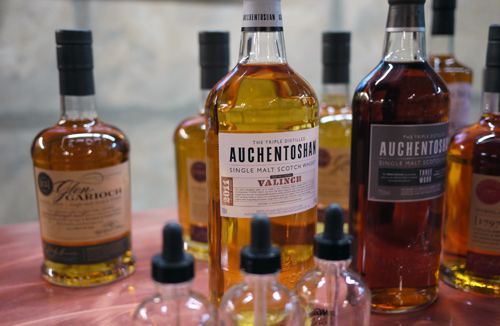 Go Whisk(e)y weekend is on its 8th year (or, shall I say – just wrapped up its 8th year). The weekend-long event attracts people from all over (New England and beyond). Seriously, people fly in for this thing. This year’s lineup of events was impressive, kicking off with a Friday night dinner with Fred Laing – of Glasgow-based Douglas Laing & Co (blenders and bottlers of Old Malt Cask). Saturday was action-packed from morning till night – a full day of seminars leading up to an intimate Meet & Greet with about a dozen distilleries. And Sunday’s Grand Tasting was a free tasting with over 200 whiskies. 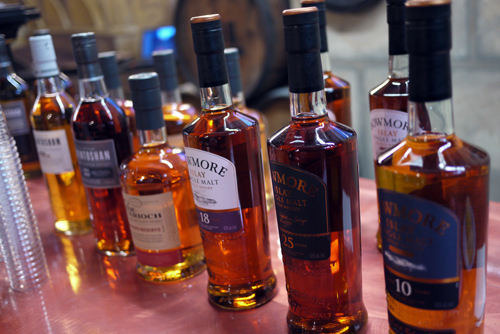 The seminar lineup this year was pretty rock star. I’m not going to lie. Especially considering that all events were free. The day started with an Amrut tasting at 11am, then a fantastically educational and entertaining Morrison Bowmore seminar with Iain McCallum (of which I’ll review later), a virtual distillation hour with Dave Perkins – proprietor of High West – and to wrap it up, a seminar on the importance of independent bottling with Douglas Laing & Co.

The seminars were hosted in Julio’s new 3,000 square foot addition downstairs. And, I know I was not alone when I say that I learned a lot. Even one of the old guys in a Scottish Kilt who seemed to know everything about whisky admitted that he had been schooled. 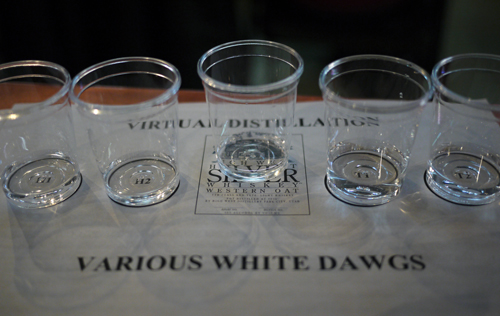 The day, however, was just beginning. The Meet & Greet tasting kicked off at 7pm. For just $15, about 150 guests were treated to a low key and relaxed tasting with about a dozen distributors, importers and brand ambassadors representing about two dozen distilleries – including: Amrut, Ardmore, Bruichladdich, Bunnahabhain, Laphroaig, Bowmore, Glen Garioch, Auchentoshan, Four Roses, Bulleit and Kilchoman.

There were absolutely some stand outs of the night. Amrut‘s line had some really impressive selections that I’ve been dying to try. I’d had their Fusion release before, which I’m quite fond of, but the Two Continents release – which just won Whisky Advocate’s New World Whisky of the Year Award and the Intermediate Sherry were terrific. Both of these whiskies are relatively young (due to the nature of aging in Bangalore, India) with high proofs, but they come across sophisticated and well balanced, and 100% delicious. 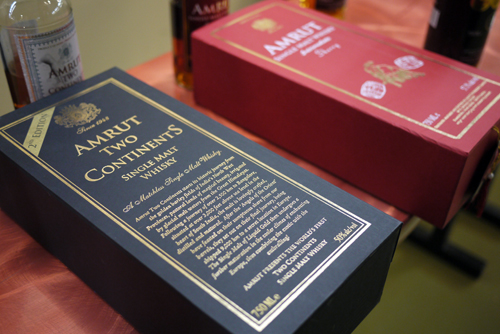 Bunnahabhain was another stand out. Their 18-year expression has been one of my go-to whiskies for years, but I have never had the opportunity to try the 25 year. It’s much more sweet, dessert and wood spice than their younger bottlings, mixed with tropical fruit and toasted mocha – a warm and spicy whisky that was a pleasure to taste. And I was also excited to try the new Bunnahabhain Toiteach – a peated whisky that adds a healthy dosing of campfire and salty ocean to the traditional Bunnahabhain profile. Perhaps showing a bit young and unrefined, but an interesting release for the distillery, nonetheless.

Laphroaig 25 and Ardmore 30 are two major crowd-pleasers. I actually had these two side by side at last years Single Malt and Scotch Whisky Extravaganza, and loved both of them then, just as I did now. The Laphroaig is sweet and peaty, with toffee, cocoa and citrus mixing beautifully with an earthy smoke that comes off fiery and delicious. The Ardmore is smooth, silky and floral with many layered sweet notes of cocoa, bourbon and toffee. It has char and smoke and packs a punch that lights up your night. Both of these whiskies are an incredible treat. 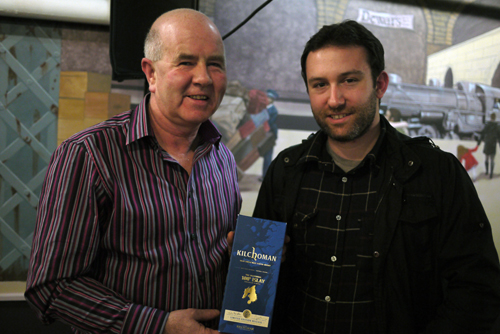 Kilchoman’s John MacLellan, former Distillery Manager at Bunnahabhain, joins me for a picture

There wasn’t a huge presence of American Whiskey, but Four Roses held the American torch proudly. As you may know, from my recent Valentine’s Day post, I’m a fan of Four Roses limited edition bottlings. And, I was quite happy to get a preview of the upcoming 2012 Limited Edition Single Barrel release at this event. Look out for this one because it’s really good – a spicy monster with all of that dancing Four Roses flavor that you’d expect, hand-selected by Jim Rutledge. I’m looking forward to seeing this one on the shelves.

I, unfortunately, wasn’t able to make it to the Grand Tasting on Sunday. I hear it’s truly a great experience.

A big thanks to Julio’s for making this event happen. I look forward to the 9th annual, 2013 Go Whisk(e)y weekend. And for all of you who are in the New England area, who didn’t make it out, make sure you block off the weekend next year. It’s a can’t miss.