I remember as a kid I’d stand in front of a vending machine for what could have been an eternity trying to make up my mind. What was one to choose? M&Ms, Snickers, Funions… It seemed like the hardest decision I would ever have to make.

These days I’ve graduated from the vending machine to the whisk(e)y cabinet. I literally can stand in front of my selection of whiskey for ten minutes or more trying to decide if I’m in the mood for bourbon, rye, Scotch, Irish whiskey or some other random bottle that made its way into my home. There’s nothing logical about this decision-making process. It’s about tapping into your true gut instinct, wrangling your inner taste waves and making a decisive selection that will most certainly suit your mood. 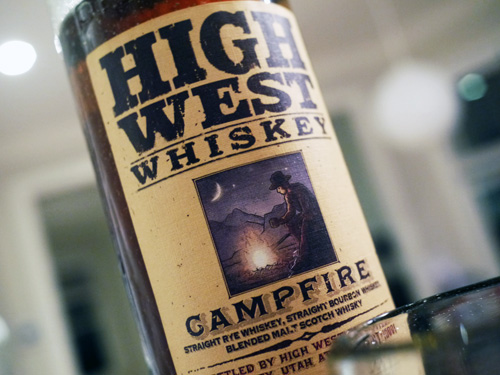 Thankfully, David Perkins from High West Distillery must’ve been having the same decision-making problems as me because there really is no other explanation for High West’s new Campfire Whiskey. Seriously, what distiller thinks to blend bourbon, rye and peated Scotch together into a single bottle and release it to the public market, other than a distiller who is utterly troubled with decision making?

Okay, perhaps there were other reasons involved. Maybe Mr. Perkins is just an avant-garde, eternally curious and bad ass dude who likes to throw tradition out the window for mind blowing experimentations and science projects. Maybe he has a inner devil who likes to screw with people. Yes, that’s probably the case. I knew it when I met him a few months back that he was a deviously evil man who was using his scientific might to send people’s heads spinning into a whiskey abyss.

Well, whatever the reason may be, I’d like to take this opportunity to say, “Thank you. David Perkins of High West Distillery & Saloon, thank you for Campfire. Not only is this whiskey a fantastically delicious, surprisingly well-balanced and satisfying spirit, but it has made my evening whisk(e)y selection process much, much easier.” When in doubt, Campfire. Because, sometimes, just one style of whisk(e)y isn’t enough to satisfy the most discerning drinker’s palate. 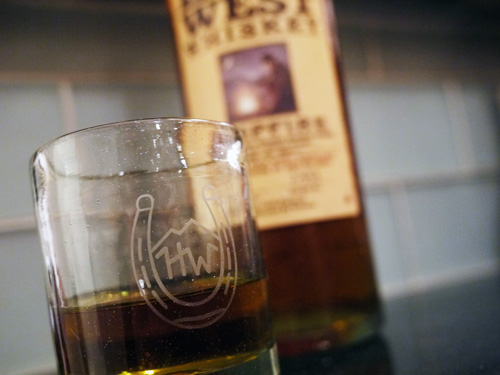 But I digress. Let’s move on to the tasting notes.

On the nose you really do get a little of all the different whiskies in the blend. There’s not as much peat smoke as I was expecting at first, especially given the name Campfire, but there is a smokey malt component lingering around. As a peat-o-phile, I may have liked just a tad more of the burning embers, but I have a feeling Mr. Perkins knows what he’s doing. More distinctly I get dried golden fruit and cinnamon, toffee and a little floral vanilla and honey. The whisky definitely plays tricks on your nose as you pick up hints of bourbon and then it fades to Scotch or rye. Quite unique.

On taste, the whiskey is smooth and creamy, with a lot of sharp spice and pepper. Again, you get these sweet bourbon notes of vanilla, honey and marmelade and dry rye spice and then a mellow peat comes drifting in to throw you for a spin. As the spicy finish continues to build, traces of bourbon and Scotch keep jumping back and forth. I’m confused and in awe all in the same sip.

Try as I may to define this whiskey, it really is a unique beast that pushes down walls and defines its own terrain. I like Campfire. I like it a lot. Not just because it makes decision-making easier, but more importantly, because it’s one damn fine whiskey. 91 points.