Passion, Education and Freshness: Putting Craft Beer to the Test

When you think about where craft beer is today, it’s nearly impossible to not recognize the journey travelled and how far this industry has come. As craft beer has edged closer to a 10% market share, the diversity of product and the knowledge of retailers and consumers has continued to expand. But, I think we can all agree that there’s still a lot of room for growth across the board. Especially with topics like education and beer freshness. 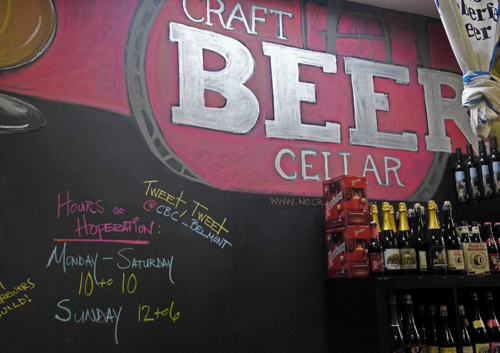 Suzanne Schalow and Kate Baker are the founders of Craft Beer Cellar in Massachusetts, and when it comes to pushing craft beer and craft beer knowledge to the next level, these two women are seriously passionate. A passion, I may add, that’s paying off for them, and for the community around them. After seeing success on their first retail store in Belmont, they’ve begun expansion plans to open additional stores in Massachusetts, starting with a local, New England-only craft beer store in Winchester.

I had the opportunity to chat with these two self-admitting beer geeks on a mellow morning in March, just as Boston’s Beer Week was kicking off. I wanted to get their take on the current craft consumer mindset, how breweries are pushing the envelope on topics like freshness, and how knowledge and education are impacting the industry. If there’s one thing that became clear from our conversation, it’s that Suzanne and Kate are ready to put craft beer to the test on all fronts. Suzanne: The craft beer study groups started out with us wanting to ready anyone on our team for second level Cicerone certification. Our staff is 100% Cicerone level one certified and I feel pretty proud of that… [Cicerone is, generally speaking, the equivalent of Sommelier in wine speak]

We have one woman on staff who’s taking the test in April, she does all of our social media and PR. We’ve actually required her to be Cicerone level 2 by the end of this year and Cicerone 3 by the end of next year. She’s going to stay with us and help grow this brand. She’s gotta be one of the most knowledgable people in the country. She’s gotta get on that train. We’re also readying ourselves for the third level which is two days – 75% tasting. It’s not going to be easy. You go, am I ready for this? Can I blindly pick out any beer style in this store?

But that’s where it started. And, as we talked to people in the beer industry we realized there was an extreme need for education. I mean, it’s fun. It’s not like it’s super hardcore. Some people come in late and say, “I’m really sorry,” and it’s like, if you can’t be late to beer school then what can you be late to? But we wound up filling it up. There were about five slots that were filled with people just wanting to learn. It was a good mix.

I think it’s great. There really isn’t anything like that around for beer, especially anything that’s open to consumers – at least not here in the Boston area. I mean look at how many opportunities for education exist in the wine industry. Why shouldn’t craft beer have that?

Suzanne: Yea, it’s coming. I mean one of the things we do with all of the staff here is that we’ll take like a Hoponious Union, for example. That stuff is so fresh and you can see bottled on February 27th so we wrote on the cap and stuck it in the refrigerator and let it stay there for exactly three months and then opened it and did it side by side with a fresh one.

I think that’s something that a lot of consumers would be interested in doing as well. I know I’ve often wondered, and I think it’d be a great learning experience. Did you notice a big difference?

Suzanne: Yes. I mean, was it not drinkable? No. But (there were differences) on many many levels, not just one. It wasn’t as hoppy. It wasn’t as sharp. There were a lot of things about it. It was a little bit more of a sloppy beer. And I’m not picking on their beer. I mean, we’ve got some old Deviant Dales that we’re intentionally saving that we’re going to hold for six months because it’s in a can and we really want to crack it open next to a fresh one. I think this education can never stop. But I do subscribe to it.

We had a driver ask us once, he said, “Okay, I don’t get it. Why are you keeping that beer when it’s nine months old but you’re sending that one back?” And I said, well this one’s 12% alcohol and it’s a Belgian-style Quad. So we explained it to him and it’s cool that our delivery drivers are now getting in tune. Sometimes they won’t even bring stuff in. They’ll say, “Yea I got so and so pale ale and I didn’t even bring it in because it’s old.” Well what does it say? “Oh, September” Good call.

I would have to imagine that Craft Beer Cellar has some of the most knowledgable craft beer customers in the state. And, because of that, I’d imagine that things like beer freshness really matter. Have you noticed a change in buying behavior and decision making? Are more people buying beers to hold onto?

Suzanne: I think about 50% of our customers are beer geeks. It goes without saying that they make decisions based on certain factors and that other 50%, we’re just seeing a huge change. I think we’ve survived from day one on 50% of our customers being beer geeks. At the same time that group grows, so does our entire customer base so it stays pretty steady…

IPA’s are our number one style. Or, hoppy beer, I should say. And I’ve watched the way people have grown in the way that they’re buying those beers… now they look at one and go, “oh, 90 IBU’s, yea I know that’s pretty bitter.” But, yes, as this group grows it makes sense that more and more people are storing and cellaring beers. There’s a big movement as well for drink it fresh. Definitely. Producers like Stone and The Alchemist have made some pretty big strides in promoting beer freshness recently. That said, it’s still easy to come by 6-month old IPA’s on shelves of retailers. Hell, I hate to admit it, but you still may come across 6-month old IPA’s in my fridge! Where do you think the biggest education challenges are? On the distributor side? Retailers and bars? Consumers? All of the above?

Suzanne: I think it’s all across the board. I think that consumers have a lot to learn but one of the reasons this place (Craft Beer Cellar) is on fire is because consumers feel like they can come here and get an education. They know they can ask a question about a beer and that question is going to be answered accurately. Everybody here can answer the question about what beer is on our shelves, what style it is, what ABV it is… so I think it just goes without saying that the consumer is interested. The distributor has had to change. They’ve come some distance but there is still tons and tons of work to do. Even from the way they handle it.

…But, you know, we’re all in this together. Everybody’s got work to do.

I’m curious what you think about Stone’s Enjoy By series? Do you think it’s helping with education? Do you think that’s why they do things like this, or, for instance: stonebrew.com/freshbeer?

You don’t think it’s marketing? I mean, I think it’s cool, but I’m also a marketer by trade. Granted, I also think it’s cool from a craft beer lover’s perspective as well. So, perhaps it’s a hybrid…

Suzanne: Having worked with Stone for a long time I have always known them to believe in fresh beer. It exists in their company philosophy, but they’ve also got some smarty beer geek up in marketing that was like “hey, let’s take this to another level…”

I didn’t even get one this go around. We blew through 20 cases in 5 and a half hours.

Wow. That’s unbelievable. It really is amazing how big the audience is now for good, limited release beers like this. I couldn’t believe how fast you sold out of Troegs Nugget Nectar this past month.

Suzanne: Yes… and we got double what we got last year. We blew through about 130 cases. The truth is that our business is growing. Craft beer is growing… we were talking last night and one of our employees was saying “I hope we see craft beer get up to 30-40% market share.” She said, “I dream about stuff like that.” And I said, yes, me too.

I’ll cheers to that! It’s an exciting time in craft beer. There’s no question about that.

Suzanne: Yes, it certainly is. We actually finalized our lease yesterday on the second store in Winchester. We’ll get everything wrapped up on Monday. This store will be New England beers only. We think it’s the right time. There’s some great stuff coming out in New England right now. May as well give it a try. See if it sticks to the wall. All we really want to do is get good beer in front of people.

And really, that’s what it’s all about, right? Good beer.

A big thanks to Suzanne and Kate at Craft Beer Cellar for their time and for being huge supporters of craft beer in New England. If you want to contribute to making this New England-only Craft Beer Cellar a reality, GO HERE. There’s also an upcoming off-flavor tasting course on April 10th that CBC is offering. Information can be found HERE.