Stone Brewing, America’s tenth largest craft brewery, has over the course of the past few years flipped the fast switch on cranking out collaboration beers. What started in 2008 as an idea to give tribute to the spirit of camaraderie between brewers, has turned into a staple of Stone’s ongoing lineup. In 2008, the brewery released its first two collaboration beers, and that number has been growing ever since. Thus far in 2013 Stone has already released three collaborations, including the Dayman Coffee IPA, w00tstout and R&R Coconut IPA. The fourth, Suede Imperial Porter, is slated for release in early October.

2013 has been a milestone year for Stone when it comes to collaborations. With the release of Dayman in March, Stone unveiled a new look for the collaboration bottles which has been used for all other releases since. More importantly, Stone also unveiled their first non-brewery collaboration this year. w00tstout, or Stone Farking Wheaton, pushed Stone, and I’ll argue, craft beer collaborations as a whole, into a new domain. Not only did this collaboration celebrate the coming together of three unique individuals (Stone CEO Greg Koch, geek idol Wil Wheaton and Fark.com founder Drew Curtis), but it also was released with two awesome collectors bottles, and put Internet/geek culture on a very cool pedestal (thanks for that, Stone!). 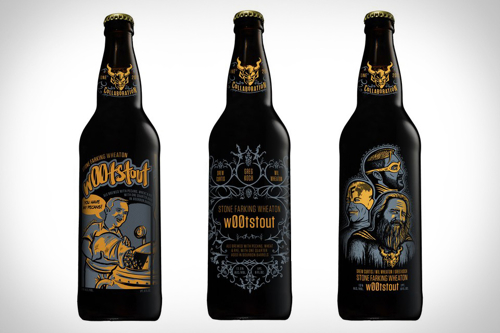 As a craft beer consumer, Start Trek fan, Internet geek, marketing professional and avid collector of limited release items, w00tstout hit me on a number of levels. Perhaps the idea to brew this beer came about organically between Greg Koch and his buddy, former Star Trek The Next Generation star, Wil Wheaton, but as such a marketing powerhouse in the craft beer space, I also think Stone recognized that a project like this had the potential to hit a number of different consumer markets. Releasing the beer with three limited edition bottles was a smart touch to capitalize on both craft beer and geek culture, and ensured that folks like me would go crazy over the release. 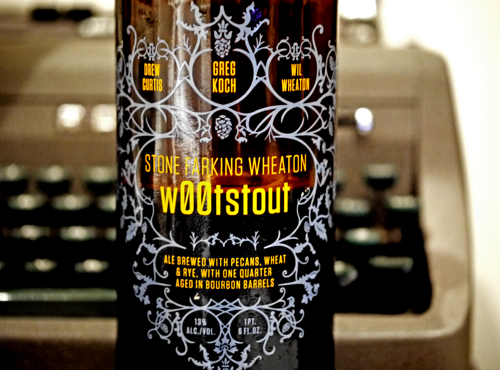 Fact is, I think we’re just at the beginning of these non-traditional collaborations in craft beer. Projects like w00tstout are creating a path for how breweries may be able to partner with brands, people and different forms of entertainment. These collaborative projects allow breweries to tap into different markets and consumers (which is good because it pushes craft beer as a whole further), and keep things new and exciting for both consumers and breweries. Of course, as I’ve continued to reiterate throughout this series on craft beer collaborations, at the end of the day, projects like w00tstout are only as good as the liquid inside the bottle. So, on that note, let me get right down to it… 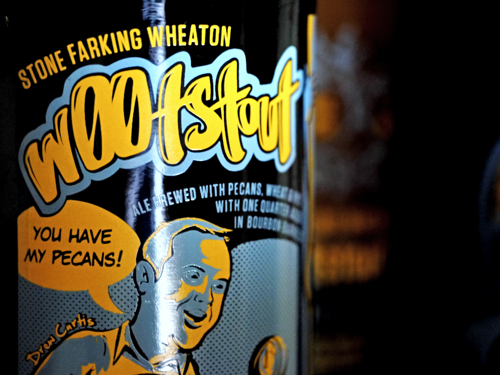 My Take: w00tstout is not a bashful beer. It’s a 13% Imperial Stout brewed with wheat, rye and pecans and partially aged in Bourbon barrels. So, right off the bat, you know this beer is going to be a doozy. It’s black, thick, creamy and decadently rich with a thin espresso head. There’s lots of sharp rye spices, nutty earthiness from the pecans, a heaping of dark chocolate, toasty vanilla, molasses and a long warm finish with another hit of that rye spice at the end. The high alcohol doesn’t get in the way of these rich flavors and the oaky bourbon seems to have just right the right touch. This beer should do nicely with additional aging. Damn delicious. 90 points.

Honestly, there really isn’t much to dislike about this beer. It was awesome on many levels and I hope that Stone does more projects like it in the future. Did you try w00tstout or other Stone collaborations this year? What do you think?

Want to read more of the Craft Beer Collaboration series?

Part I: A History of Partnership
Part II: A Gentlemen’s Club Trio