For those of you keeping an eye on the evolution of Buffalo Trace’s elite brands like George T. Stagg and Van Winkle, you may be interested to know that Stagg Jr isn’t the only line extension to hit the market recently. Back in July I wrote about the launch of a new group of tequila’s by the Sazerac Company (owners of Buffalo Trace) called Expresiones del Corazon. The line includes five tequilas: one blanco and the others aged in whiskey barrels. But not just any whiskey barrels… these barrels come from some of Sazerac’s foremost whiskey brands – Van Winkle, George T. Stagg, Sazerac Rye and Buffalo Trace. 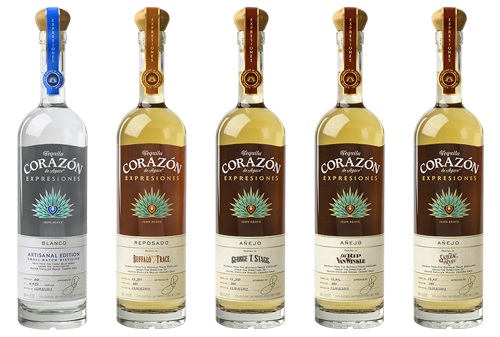 As a fan of both whiskey and tequila, as well as experimentation in the spirits space, this project piqued my interest from the get go. And even though I’ve heard rumors that the line won’t be released in Massachusetts** (they’ve been rolling out in other markets around the country over the past few months), I was able to get my hands on all five expressions to give them a try. Here’s my take…

Blanco
The entire Expresiones del Corazon line uses this blanco as the base. The agave for this tequila was selected in 2010 from two unique locations in Arandas, Jalisco, and was slow-cooked in stone ovens at the historic Casa de San Matias distillery. 6,000 bottles of the blanco were produced, making it the highest production number of the lot. The nose is spicy with juicy citrus, melon and cooked agave. The palate is sweet and a little tangy, with white pepper, herbal notes and lemon lime citrus. There’s lots of dry spice on the finish as well, along with an undercurrent of brininess. Overall, I found this tequila to be more complex and terroir-driven than the standard Corazon expression, but for the $60 price point I’m a little so-so. There are many other blanco tequilas I’m more drawn to, such as Tequila Ocho for about $15 less. 86 Points. 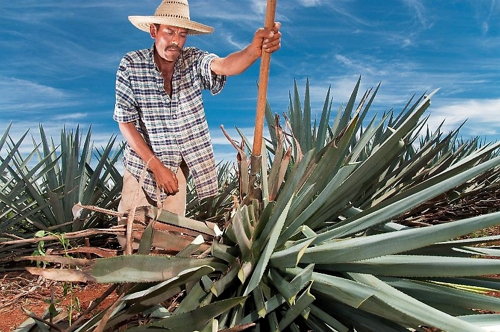 That said, the aged releases in this Expresiones line are really what I came for… and I have a feeling the same will be true for most of you whiskey fans out there who are drawn to the line for the specific barrels being used.

Buffalo Trace
As the only reposado of the bunch, the Buffalo Trace expression was aged for just shy of a year in oak (all barrels came from the Buffalo Trace distillery and were brought to Mexico for aging). Sweet and peppery on the nose, with an array of floral potpourri aromas, this tequila already seems way more interesting than the blanco. Like all of the releases in this line, the tequila is dry and spicy; there’s also a good amount of oaky vanilla, caramel and cinnamon which are clearly a result of the ex-bourbon barrel aging. The finish is long and sharp, carrying some of the herbal, briny notes that were present in the blanco. I enjoyed this expression, but the whiskey effects were definitely more tame than the three anejo’s to follow. 87 Points 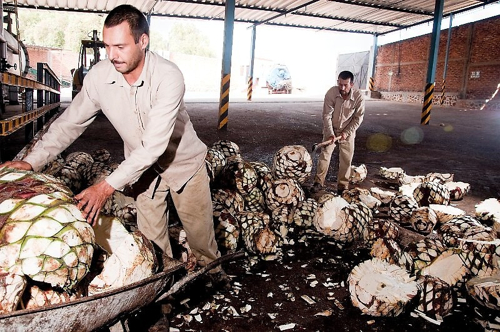 Breaking down the agave (from: expresionesdelcorazon.com)

Sazerac Rye
This was easily one of my two favorites of the lineup, and it was the expression that had the most distinct resemblance to its former whiskey mate. Immediately on the nose you get that classic Sazerac rye aroma, with layers of sweetness, hints of berries, mellow wood, spice and vanilla. The extra aging goes a long way in taking this tequila to the next level on its collaborative journey with the whiskey. Lots of barrel notes here – caramel, spice, cocoa, dry and briny oak along with some citrus, nuttiness and a salty finish that lingers for quite some time. 88 Points

Stagg
Like the Sazerac, the Stagg has an assertive whisky nose, but it isn’t as definitively Stagg as the Sazerac is definitively Sazerac. There’s a lot of cinnamon here, dry, smokey spice, caramel and woody agave. The bourbon and wood almost take over and the balance between whiskey and tequila seems a little foggy. The palate is sweet and spicy, with oaky, salty wood, cinnamon, citrus, cooked agave, and a long dry finish. This one feels a little unfocused and falls a bit short for me. 86 Points 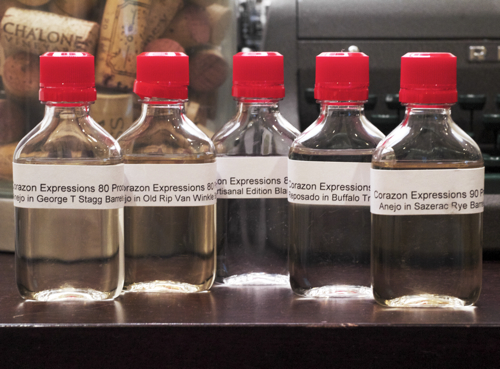 Van Winkle
When it comes to brand excitement, the Van Winkle is going to be the one that most people run too first. And, in this case, that’s actually a good thing because this was my favorite of the bunch (in a close heat with the Saz). The Van Winkle expression is the sweetest on the nose, with cinnamon, ginger and fruit that covers up a lot of the tequila aromas that were present in the blanco. In fact, in a blind tasting I’m not sure I would know this was tequila just from the nose. You definitely get hints of Van Winkle here, almost as expressive as the Sazerac. The palate is well balanced between tequila and whiskey – I think the most focused and balanced of the bunch. Peppery, vanilla, nutty, woody, and a little vegetal. The finish is dry, sharp and spicy. 89 Points.

In Sum
I think this is an exciting endeavor by Sazerac corporation. Taking brands like Van Winkle and Stagg makes tequila exciting for whiskey drinkers who aren’t often apt to try other spirits. It’s also fun to taste through unique spirits experiments like these. The Van Winkle and Sazerac were my two favorites, but I also thought the Buffalo Trace reposado was an interesting expression as well. The Stagg was a miss for me and as I mentioned above, the blanco didn’t convince me that I should spend $60. But, in all reality, if you’re looking at this series of tequila’s, you’re most likely looking at them because of the barrels they were aged in.

For folks like me that love whiskey and tequila, and for die hard Van Winkle and Sazerac fans, I’d recommend seeking these expressions out. As for the others, the price point may be a little too high to justify, unless you’re looking at them from a collection and novelty perspective. At which point I say, go for it… they’re pretty damn cool.

**Edit 10/8: Just learned that Massachusetts will be getting a small allocation. Keep your eyes peeled!