Extreme Beer Fest has become a craft beer showcase of truly amazing proportion. The lineup of beers reads like a who’s who on Beer Advocate’s Top 250 list. 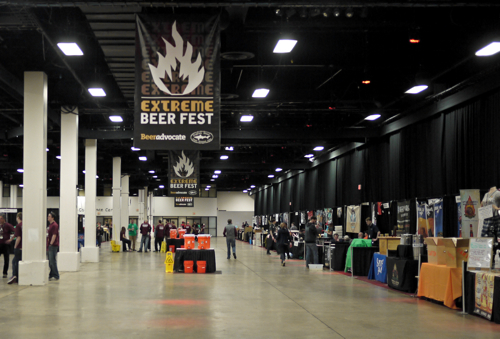 Of course, if a king had to be crowned from this overwhelmingly awesome selection of brews, there was one brewery that stood perhaps just a little bit taller (or, shall I say, with a line just a little bit longer) than all else. And that brewery would be Funky Buddha — a three-year old operation out of Boca Raton, Florida that has gone to the very extreme ends of the beer spectrum to come up with crazy concoctions full of huge, bold flavors like those showcased in their Maple Bacon Coffee Porter. Or, like those in their fantastic Last Snow — a porter beaming with coconut, coffee and white chocolate (one of my favorite beers of the fest). 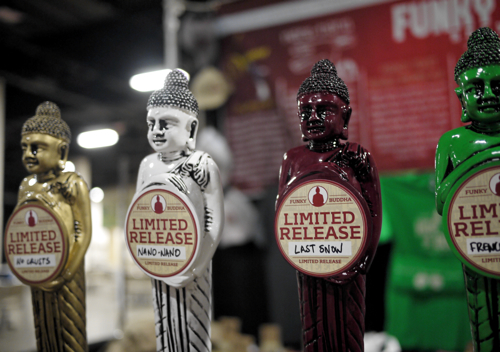 In a slightly hectic moment against a backdrop of loud chatter, I got a few minutes to speak with Funky Buddha’s founder, Ryan Sentz. I asked him if he expected this kind of turnout for their beers and he simply replied that he could have never imagined it (despite having just been named Draft Magazine’s Brewery to Watch). He was genuinely honored by the reception. And how could one not be? To be so sought after amongst such an epic showing… even the most seasoned of brewers would beam with pride over a reception like this at an event where you could have literally closed your eyes, spun around and pointed, and you would have been looking at yet another great brewery. 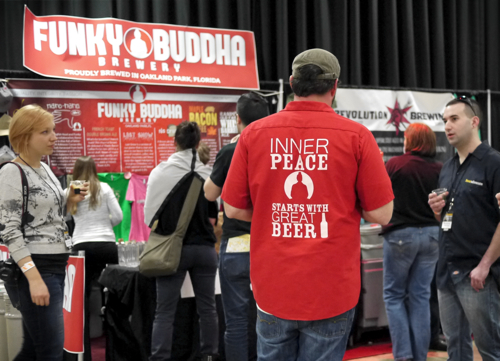 But to say that Funky Buddha was the main highlight would be perhaps discounting the very magnitude of this event. The truth is, there were so many highlights, that each session became three and a half hours of non-stop great drinking. What Funky Buddha did seem to represent, however, was that what craft beer geeks were looking for this year when it came to extreme was flavor. Bold, different and genre distorting flavors. Like, for instance, the Peanut Butter Chocolate Milk Stout from 4 Hands Brewing. Or like Carton’s Regular Coffee (I’ll take that coffee with milk and two sugars, please). Or, perhaps the punch-you-in-your-face-holy-sh*t Mornin’ Delight, a maple syrup soaked Russian Imperial Stout from Iowa’s Toppling Goliath Brewery. 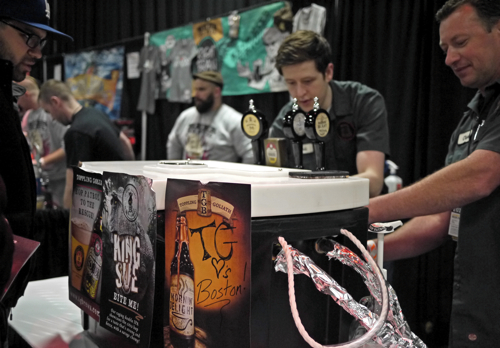 Yes, Iowa has a kick ass brewery, and its name is Toppling Goliath.

For me though, Extreme Beer Fest isn’t about just one thing, or one definition of extreme. In fact, while the big bold flavors were cool to explore, there were many instances in which big and bold got in the way of balanced and drinkable. But, whether your pursuit is big flavor, big ABV or big balls, there were so many reasons why EBF2014 kicked ass this year, and took extreme to the next level.

Here are a few of my favorite beers and moments:

1. Talking to Tomme Arthur about his utterly fantastic Cuvee de Tomme, while he explained the story behind the beer. And then washing that down with the massive 15% Deliverance.

2. Indulging in The Bruery’s Chocolate Rain and in Dark Horse’s Bourbon Barrel Plead the Fifth before the crowds rolled in for the Saturday day session (What? Two of Beer Advocates top 50 beers before 1pm?). 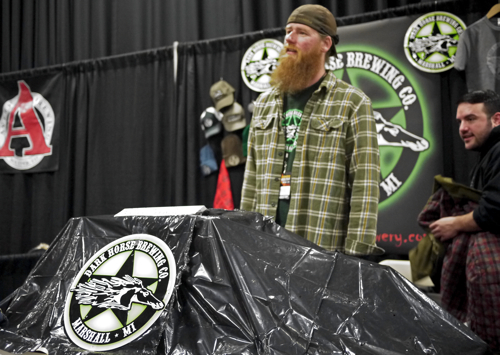 Don’t let the black plastic fool you. Underneath is pure awesomeness!

3. Tasting the still in development Utopias (on tap!) that will be released in 2015. Yes, it’s one of the best beers in the world. And yes, 2015′s is going to be another winner. 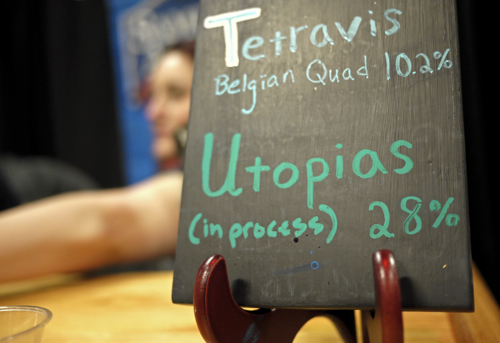 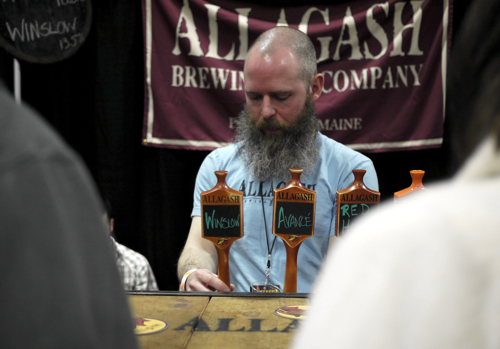 5. Realizing that there are still so many amazing Double IPA’s to be had, like Tree House Juice Machine, Cape Ann Deadeye, Half Acre Double Daisy Cutter and Toppling Goliath’s Sosus. 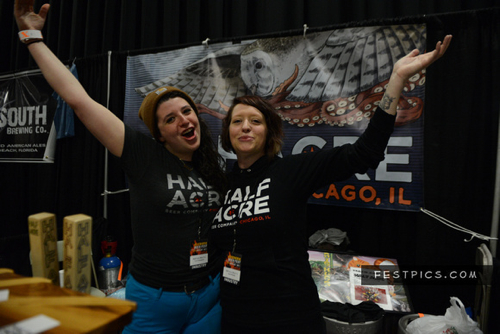 The Half Acre ladies (Photo provided by Festpics.com) 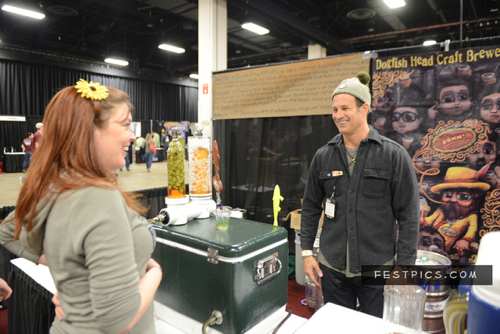 7. And last but certainly not least, enjoying the ridiculous amount of craft beer goodness that came into Boston during the week leading up to EBF and surrounding the event the weekend of. Like, for instance, Against the Grain’s pop-up sampling at Row 34. Or all of the insane beers Row 34 put on tap in celebration of EBF. Or the Lost Abbey tap takeover at The Publick House… the list goes on. 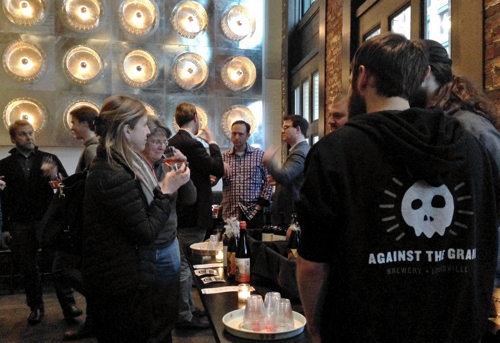 Against the Grain at Row 34

So, a big thanks goes out to the Beer Advocate team for throwing a great event, to all the breweries who brought their A-game, to all the bars who jumped in on the action, and to all the craft beer geeks who came, enjoyed and conquered. Until next year, I leave you with some more pictures of the mayhem… 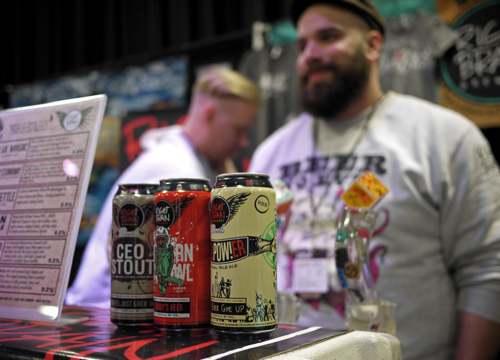 Right Brain, yet another great brewery from the state of Michigan 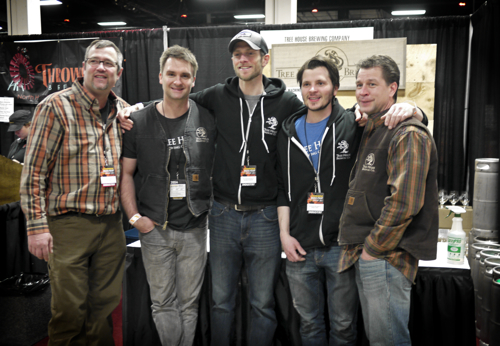 The Tree House crew – these guys are producing some of the most exciting beer in Massachusetts. 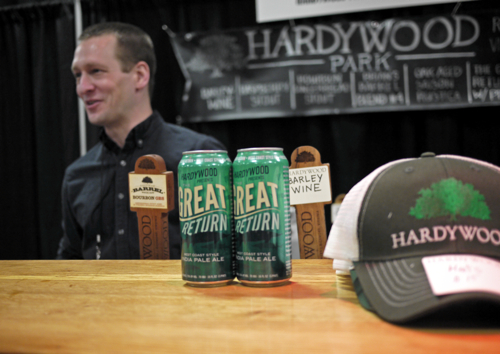 A great craft brewery out of Richmond, VA. 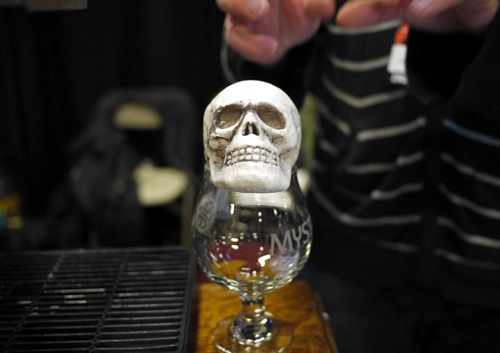 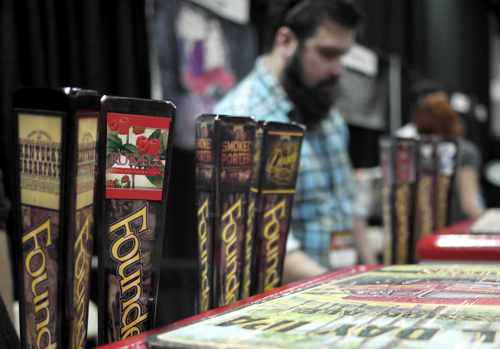