The Transformation of Lunch Car 773: Historic Landmark Becomes A Haven For BBQ And Whiskey

The Rosebud has been a part of Davis Square in Somerville, MA since 1941. The diner car was installed the same year that Citizen Kane was released, and the year that the US entered WWII. Yes, the Rosebud had already seen a lot by the time it entered my life in 2002 when I moved to the area. I was living in Davis at the time and it became one of my go-to spots for hungover Sunday morning breakfasts. There isn’t much in this world better for a rotten hangover than an endless mug of diner coffee and a heaping plate of eggs, sausage and baked beans all consumed within the shaky exterior of a somewhat decrepit diner car from the second World War era. 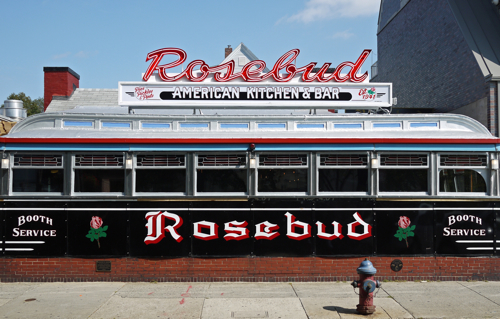 But that was then. Now, The Rosebud is literally one of the only standing landmarks that harkens back to the old Somerville. A Somerville that has almost entirely been paved over by gentrification, students, young professionals and others who find a home in this Boston suburb. It’s important that this history lives on; and thanks to Alpine Restaurant Group, it will.

An all new, and very shiny, Rosebud (excuse me, Rosebud American Kitchen) opened just a few weeks ago and it has quickly become one of my favorite restaurants in the Boston area. No kidding, I have already been there three times. When I first walked into the new Rosebud my mouth literally dropped open as I stared around looking at this completely transformed space. The restaurant has been expanded and beautifully renovated; and where classic eggs, beans and chicken fried steak once darted table tops, it is now filled with fantastic BBQ, delicious baked pies and an all-star list of American whiskey, craft beer, cocktails, and wine.

Davis Square has gone through a transformation of its own over the past few years. And if you’re familiar with the area, you may know that Alpine Restaurant Group has been one of the major players in its evolution. Their other Davis restaurants, Posto and Painted Burro, have become staples in my eating (and drinking) repertoire, and the latter has one of the best Tequila selections in the area. Rosebud completes the holy trinity. And this time, whiskey is at the center of the show. 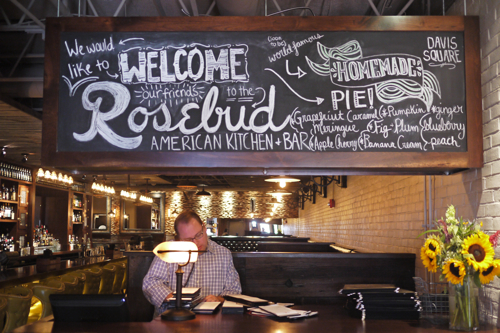 The new restaurant features over 50 American whiskeys, with a kick ass top shelf including most of your hard-to-find gems like George T. Stagg, Parker’s Heritage, and Elijah Craig 23 (amongst many others). The list also includes their own barrel of Four Roses, which is an OBSF, high rye selection. I had a glass on my first visit and thought it was an excellent pour – spicy, herbal and dry with that classic Four Roses single barrel DNA that has made Four Roses one of the best distilleries in America. The fact that Rosebud was willing to go all in on a full barrel out of the gate says a lot about what these guys are setting out to do.

Alec Riveros is the Director of Operations at the new restaurant, and he’s also the man behind the stand-out alcohol program (which, obviously, is the most important gig in the joint). I stopped by to talk to Alec just a few days after the opening and we chatted for a while about the history of Rosebud and the evolution of the ideas behind the new restaurant. It became clear very quickly that a lot of thought and time had been put into everything. Especially the whiskey. In fact, Alec had spent some time down in Kentucky getting prepared for the launch. One of the ways he’s honoring the history of Rosebud is by tying into the history of American distilling. And at the heart of American distilling is Kentucky Bourbon.

The whiskey list, though, is just part of how the new restaurant is paying homage to the Rosebud. Take a look at the cocktail list and you’ll quickly see that nearly every drink is named to reflect the story. The 1941 Cocktail is named after the year the diner was installed. Lunch Car 773 was the name of the diner car. Jaunty Jack was the name of one of the restaurant’s previous iterations. And then there’s Cuckoo’s Nest. “I was doing some research,” said Riveros, “and over the 70 or so years that the Rosebud has been here, they actually closed for a few years and they leased the space to an owner that turned the Rosebud into a Tex Mex restaurant. It was called the Cuckoo’s Nest and it lasted two years. They defaulted on the lease and so the owners took it back.” And now, thanks to Alec, the Cuckoo’s Nest lives on (in the form of a cocktail made with vodka, Red Delicious, Amaro and Lemon). 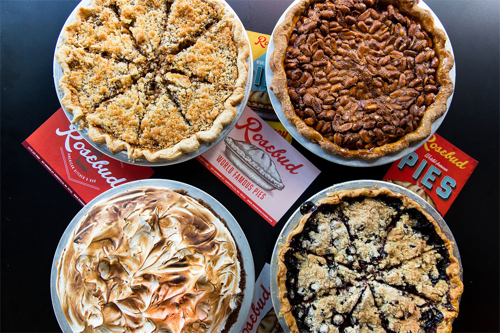 The new Rosebud, however, has set out to do a whole lot more than build on heritage. They’ve set out to celebrate BBQ, smoke, wood and authentic neighborhood cooking; and they’re doing all of the above with finesse and passion. The food is lead by partner John Delpha, a seasoned chef who came up through the ranks of some of Boston’s top restaurants and who most recently has been a serious player on the BBQ competition scene. For a dose of this barbecue goodness,  check out the chicken wings — BBQ smoke for days melded with honey and the perfect crunch and damn! Seriously, my co-conspirator is from the South and she thinks this is some of the best BBQ north of the Mason Dixon.

The smoke and wood extends throughout the drinks list with a strong lineup of barrel-aged cocktails and barrel-aged beers. The lineup will change often, but out of the gate the barrel-aged beer list included bottles like Cantillon Fou’ Foune, The Bruery Smoking Wood, Avery Uncle Jacob’s Stout and Goose Island Bourbon County. The draft list, by the way, isn’t so shabby either (they were one of the first bars to get local brewery Aeronaut’s beer on draft, even though I opted for a fresh glass of Maine Beer Co. Peeper). On the cocktail front, the Aged White Negroni I had during opening week — with Death’s Door Gin, Suze and Dolin Dry Vermouth — was fantastic. Aged for just shy of a month, and packing just the right amount of wood-soaked punch.

Oh, and if you’re wondering what happened to that barrel from Four Roses, well it’s currently being used to age a batch of Night Shift beer, which will soon return to the Rosebud for you to drink. 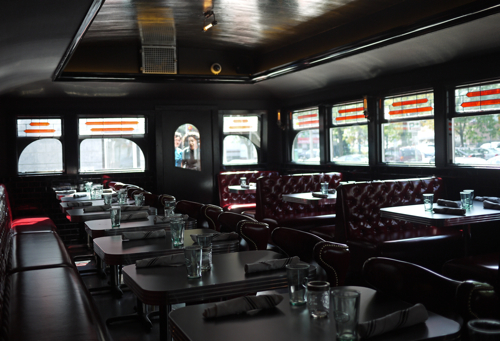 Given Riveros’ background in and passion for wine (he spent years at some of Boston’s finest dining and wine establishments like Menton, Clio and the Mistral Group), it’s not surprising to see that the wine list, as well, has a clever touch. The most clear example of which is the BBQ and Bonarda section which includes a handful of Argentinian and Italian Bonardas suited especially for the BBQ palate. “A lot of people don’t know what Bonarda is,” says Riveros. “The American palate has transitioned from Merlot to Shiraz to Malbec and now Pinot, but this is a very approachable varietal that works really well with our food. It’s fun wine.”

So, no more eggs and beans at the Rosebud. But I think, for all of this, I’m more than happy to find another place for my hungover Sundays (although, brunch service at the Rosebud does start this month). I’ve got to give Riveros and the Rosebud American Kitchen team a lot of credit for what they’ve done here. Not only have they honored the roots of this space, but they’ve done it while doing all of the right things to take it to the next level and make it awesome. Nicely done.