I’ve written a lot about the convergence of craft beer and whiskey over the past few years. Brewers and distillers are, at an increasing rate, joining forces to create products that are a result of their collective efforts. And as an equal opportunity drinker, I’m a huge supporter of this trend. You can’t make delicious bourbon barrel-aged beers without used bourbon barrels, right?

But the convergence of beer and whiskey has gone well past the point of sharing resources. There are a host of breweries in the US that have started distilleries under the same roof as their brewing operation. Breweries like Anchor Steam, Rogue, Ballast Point, and New Holland. These brewer/distillers are recognizing that life is just too short to concentrate on only one great thing. And to that I say, Amen! 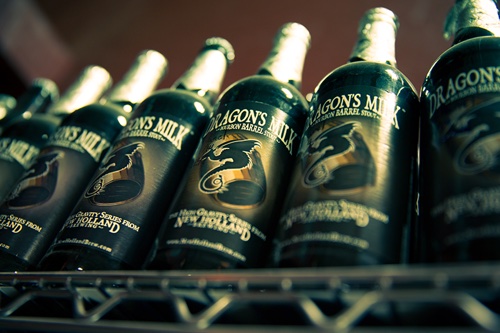 Earlier this year during Extreme Beer Fest week in Boston I had the chance to meet up with some of the guys from New Holland Brewing for a beer and spirits dinner at Eastern Standard. New Holland is a Michigan-based producer that’s approaching nearly two decades in business. Their spirits operation launched about ten years in, but even that makes them one of the original brewer distillers in the country.

At the dinner we tried a handful of New Holland’s beers such as Paleooza (an American pale ale), Blue Sunday (a sour ale), and their flagship Dragon’s Milk. The latter of which is a delicious Bourbon Barrel Stout that has become a year-round release for New Holland. Which may make them the only craft brewery in the country that can say that their top selling beer is a stout aged for 90+ days in oak whiskey barrels. Pretty cool if you ask me.

In addition to the great line up of beers that were featured, we were also treated to a couple of really stellar cocktails (what else would you expect from Eastern Standard) made with New Holland’s spirits. New Holland’s portfolio of spirits is actually quite extensive for a brewer distiller. It includes gin, vodka, rum, liqueur, barrel-aged versions of many of the aforementioned, and a handful of whiskeys like their Beer Barrel Bourbon and Michigan Wheat Whiskey. The night cap of the dinner was made with New Holland’s straight malt whiskey, Zeppelin Bend, and it just so turned out to be one of my favorite sips of the night. 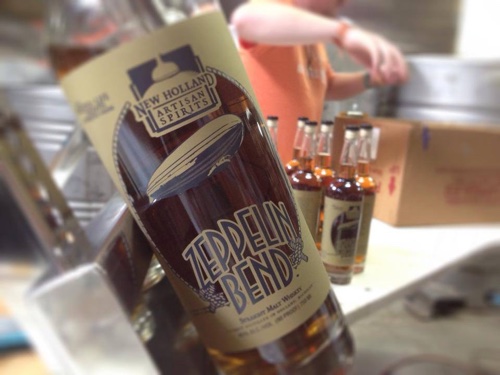 I didn’t get to try Zeppelin neat that evening, but thanks to New Holland’s VP Marketing, Joel Petersen, I got to try the whiskey on its own shortly thereafter. And despite some initial skepticism (having nothing to do with New Holland and having everything to do with the overall hit or miss quality of craft spirits in general), I came away really impressed. Zeppelin Bend is a dynamic craft whiskey, full of unique character.

Zeppelin Bend Whiskey: The Details
Zeppelin Bend is made from 100% malted barley, twice distilled and aged in new American oak with a heavy char for a minimum of 3-years. The whiskey is 90 proof and sells for about $50-$60.

The Tasting Notes:
On the nose, I get a deep, dark cocoa, malt, vanilla extract, baking spices, mellow graininess and a splash of orange and cherry. The palate is full bodied with lots of charred wood spice, more of that rich chocolate and vanilla, a hint of nuttiness (maybe walnut), and a sharp, dusty finish.

In Short:
Zeppelin Bend is not only one of the better American craft malt whiskeys made by a brewer/distiller, but I’d put it up there amongst many of the straight craft distillers as well. I really like the deep, dark and chocolatey undertones of this spirit, and although there’s a lot of wood and grain, the whiskey doesn’t seem too young or disjointed. Whether you like sipping neat or drinking in cocktails, I think you’ll find this whiskey quite enjoyable. Recommended. 88 Points