Innovation and the Braggot

Like your best friend from college, the craft beer industry couldn’t stay young and carefree forever. You know at some point it had to grow up and get all businessy (how boring, right?).

Nevertheless, as much as we may want to believe that craft beer is all  about the love of great beer, the reality is that this industry has become incredibly competitive. Especially at the upper tier, where battles for shelf space are hard fought and growth is measured in fractions of points. But even the big craft breweries (at least the good ones) recognize that keeping the passion, innovation and culture of experimentation alive is important. It’s part of the DNA of craft beer. And once you lose that, you’re losing the essence of what made you successful in the first place.

But how are breweries maintaining their craft beer DNA in the face of an increasingly competitive landscape? I’d argue: by empowering the culture of innovation from within and allowing the next generation of brewers to rise up. 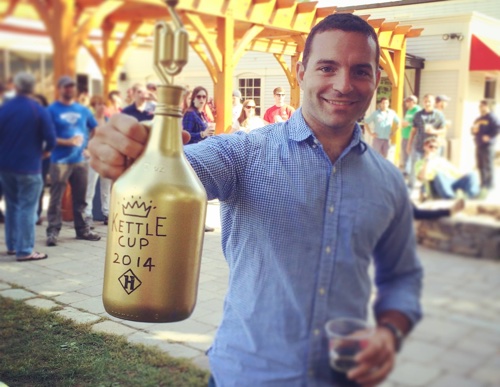 To explore this point, I recently connected with Steve Theoharides, a brewer at Boston’s Harpoon Brewery. Steve is the creative inspiration behind Braggot Rights, the standout 53rd edition of Harpoon’s 100 Barrel Series–an ongoing line of experimental, small-batch releases that has been going strong since 2003. Braggot is a juicy Double IPA with 7,000 pounds of wildflower honey and is one of the best 100 Barrel releases I’ve had. It’s a delicious beer that succeeds in balancing a light honey sweetness with a big hoppy character. Seriously, go pick one up before they’re all gone.

But Braggot is more than just a delicious beer. It’s the perfect representation of how programs like the 100 Barrel Series are helping to drive a culture of innovation, creativity and experimentation inside of Harpoon. “Brewing on our scale revolves around the precise execution of the same process to produce the same beers day in and day out,” says Theoharides. “The result is that collaborative innovation can sometimes feel like a precious commodity. The 100 Barrel Series is a celebration of those moments where creativity is both nourished as a cornerstone of company culture and as a hallmark of the craft segment.”

To Steve’s point, it’s not hard to see how “collaborative innovation” could fade from a brewery that is focused only on pushing its flagships and maximizing short-term revenue. When I spoke with Harpoon’s president, Charlie Storey, a few months ago, he emphasized how important this concept was to them. No matter how much they grow and how much they have to focus on being smarter at business, they never want to lose sight of this essential craft spirit that encourages innovation, experimentation and creativity.

Braggot Rights, in addition to being the 53rd 100 Barrel Series release, was also the winner of the 2014 Harpoon Kettle Cup; Harpoon’s annual employee brewing competition (and another outlet Harpoon has created to empower experimentation and innovation from within). Steve’s entry was the landslide winner out of nearly three dozen entries from his fellow co-workers. Which, is a big deal based on my understanding of how competitive these Harpoon employee competitions get. 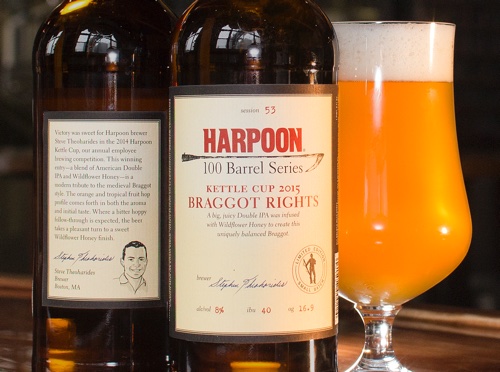 “The competition and judging of the Kettle Cup feels like the stuff of lore,” Steve mentioned. “It is an opportunity to animate something which originates in the corner of one’s imagination and share it with the craft beer community. Not to mention the portrait sketches of the brewing team on the back label are pretty darn cool.”

Admittedly, those sketches are pretty darn cool. I want my face sketched on the back of a beer label that sees wide distribution (seriously, 100 barrels isn’t that small of a release). But that’s the point, right? Not only does the 100 Barrel Series allow for innovation to thrive, but it’s also a great employee incentive/motivator—something that’s a big need at any company this size, no matter what industry you’re talking about.

Steve suggests that, at Harpoon, brewer innovation is an opportunity, not a mandate. “Very few brewers have the tools and resources that we do here,” he says. “I imagine the many that don’t would say it is a crime not to use those resources to their full potential. That being said, my counterparts need no marshaling – they are true beer enthusiasts. Pairing such enthusiasm with the freedom of our 300 gallon pilot system results in an ever-evolving lineup of new and different beers available at the breweries in Boston and Windsor, VT. The catalog of current and soon to be featured offerings include a Hazelnut Milk Stout, a Session IPA, two Saisons, an English Strong Ale, a Mint Cider, a Hoppy Ole Ale, a Belgian Strong and a Fresh Herb Brown to name a few.”

Steve didn’t address it head on, but he gets at the important underlying theme: keeping the craft beer DNA alive is about the collective company culture. And Harpoon, through programs like the 100 Barrel Series, Kettle Cup, and their annual employee beer trips to Europe (which is taking place right now in Germany), has figured out a successful mix of ways to inspire innovation, reward creative thinking and push their employees to be entrepreneurially minded. 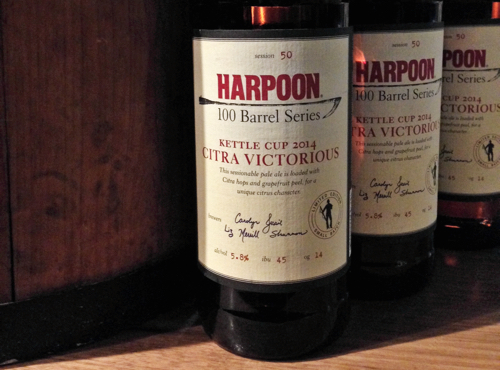 “In my opinion, innovation is essential,” says Steve. “Both internally and externally. Diversity is the virtue of craft beer and the balance between flagship and new products is absolutely essential.”

As a craft beer lover I appreciate that a big craft brewery like Harpoon is putting value on this balance. I like knowing that I can get a Harpoon IPA anywhere, anytime, and it’s going to be a good, solid IPA that I can count on. And I also like knowing that every couple of months (or more often than that if I want to go into Harpoon for one of their brewery pilot beers), I’ll be able to get something completely new from Harpoon; like a hopped up IPA with 7,000 lbs of honey. Something I’ve never had. Or like Tuscan Beer Party (the 52nd release in the 100 Barrel Series), an oak-aged ale with Merlot and Sangiovese grape juice.

I believe it was Steve Jobs who once said that “Innovation is about the people you have, how you’re led, and how much you get it.” If Harpoon, and other craft breweries their size, can continue to drive innovation from within, and can continue to put value on the craft mentality, I think there will be plenty of great new beer to come, at every level of the craft beer chain. No matter how competitive this industry gets.