In this Weekly DrinkDown: More craft beer mergers and acquisitions, Sam Adams unveils their new Brewing the American Dream winner, Harpoon brews a beer with “dirty water” and our drink of the week is perfect for gin cocktails and Sukkot.

NEWS OF THE WEEK: MORE CRAFT BEER M&A
There were even more craft beer mergers and acquisitions this week, making September the most active M&A week to date. This week’s big announcements included Dogfish Head selling 15% to a private equity firm and Craft Brew Alliance (the company that owns Redhook, Widmer and Kona) buying a minority share in Cisco Brewers. I spoke with Brewbound editor Chris Furnari to get the scoop on what all of these deals mean to craft.

CRAFT BEER
Sam Adams announced their 2016 Brewing the American Dream winner. Flounder Brewing Company, based in New Jersey, takes home the “Experienceship” which provides hands-on educational and enrichment opportunities such as coaching and mentoring from the Sam Adams team. Flounder (not to be confused with Founders) will also have the opportunity to brew a collaboration beer with Sam Adams.

In the strangest beers in the world category, Harpoon Brewery announced a new beer this week called Charles River Pale Ale. The beer was created in partnership with a water treatment company and was brewed with water from the iconic Charles River in Massachusetts. The Charles River has been cleaned up quite a bit in the last few years, but still… love that dirty water, eh Boston?

WHISK(E)Y
A number of new whisk(e)y releases were announced this week. Glenfiddich is releasing a 14-year single malt that was aged in used and new American Oak barrels, and pays homage to the relationship between the Scotch and Bourbon industries over the years. Jack Daniels is releasing their Sinatra Century Whiskey in celebration of Frank Sinatra’s 100th birthday. And, Sazerac announced a new expression in their Barton 1792 line, the 1792 Port Finish Bourbon. 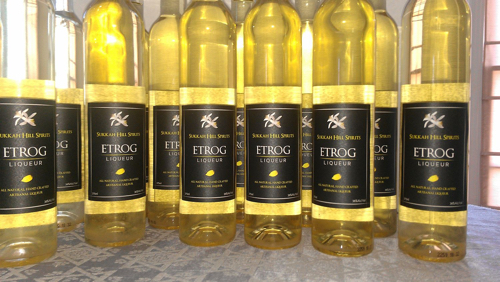 A few months ago, Sukkah Hill Spirits–a startup artisanal liqueur company based in Southern California–sent me two very interesting liqueurs: an Etrog and a Besamim. The Besamim is packed with cinnamon, nutmeg and clove and I could see it being a great ingredient for fall cocktails. Though, the cinnamon was a bit overpowering for my personal palate. The Etrog, on the other hand, was more my speed.

Etrog is the signature symbol of the Jewish holiday of Sukkot which, by the way, has been going on this week. Sukkah Hill’s Etrog is a well-balanced liqueur with a little peppery heat, lots of lemon verbena, honey, flowery lime citrus and a nice herbal and spice blend. I enjoyed it neat, but I thought it was particularly delicious when used as a cocktail ingredient. I made a Gin Ricky with Plymouth Gin, fresh lime juice and Sukkah Hill Spirits Etrog, and I got to tell you, it added a lot of character and dimension to what would have otherwise been a very simple cocktail. If you’re into these flavors, Sukkah Hill’s Etrog will be a great addition to your liquor cabinet… for Sukkot and beyond.

Here are a couple easy cocktail recipes they recommend: