It’s the first DrinkDown of the year and we’ve got lots to cover. So let’s get started!

Sierra Nevada Beer Camp is Back
Sierra Nevada is gearing up their Beer Camp engines for another cross-country tour and an even more impressive lineup of participating breweries. In fact, this year’s Beer Camp variety pack features 31 breweries making 6 different regional beers. Breweries include Lost Abbey, Societe, Dark Horse, Sun King, Perennial, Half Acre, Lawson’s, Trillium and Funky Buddha… so, you know, just some of the best breweries in the country.

The tour will kick off in Tampa in June, followed by Seattle, Milwaukee, San Francisco, Boston and winding up in Los Angeles on June 25th. Here’s my recap from last year’s tour. Check out the full tour schedule and all the details here.

Upcoming Northeast Wine Events
January and February are big wine months in the Northeast. The main event is, of course, Boston Wine Expo; which this year will be celebrating its 25th anniversary on February 13th and 14th. After the second day of the event getting snowed out last year, I’m looking forward to a full weekend of festivities this go around.

New Hampshire Wine Week is another big event on my radar this year. I’ve never been, but they’ve got a really impressive lineup of events kicking off on January 26th. I’ll be attending the Winter Wine Spectacular on the 28th in Manchester. Also, Zachys Wine & Liquor (one of my favorite NY wine shops) is doing their Great Wines of Italy event with James Suckling in NYC on February 23rd. It’ll feature over 100 Italian wineries and producers showcasing wines rated 90 points or more.

Finally, the West of West Wine Festival will take place in NYC on February 9, 2016, offering a unique opportunity to learn about and experience wines produced in West Sonoma Coast. Members of West Sonoma Coast Vintners (WSCV) will showcase their finest Pinot Noir, Chardonnay, and Syrah, all sourced and produced from these cooler climate vineyards along the extreme coastline of Western Sonoma County. Should be a really cool event.

New Yamazaki Sherry Cask
Suntory just announced the launch of their Yamazaki Sherry Cask 2016, a new version of their 2013 release which was named “World Whisky of the Year” in Jim Murray’s 2015 Whisky Bible. The new whisky uses the same lot of whiskies that was used for the 2013 base, but they’ve been matured for two additional years, and additionally, have been blended with various rare sherry cask single malts, some of which are more than 25 years old.

Yamazaki Sherry Cask 2016 is bottled at 48% and will be available in February for a suggested retail price of $300. Five thousand bottles were produced. 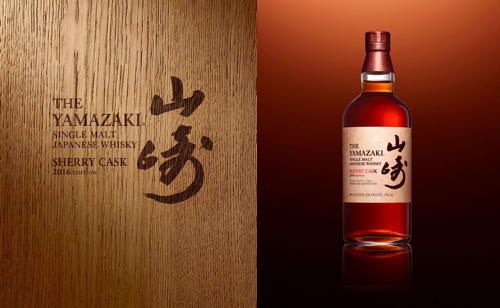 Burns Night 2016
Burns Night is one of Scotland’s greatest celebrations, dating back to the early 19th century, and it’s coming up on January 25th. The celebration commemorates the life and poetry of Robert Burns, and many Scotsman will be raising their glasses of Scotch and taking down their haggis all night long. If you want to celebrate along, Laphroaig has whipped up a Robbie Burns cocktail for your celebratory drinking pleasure. It goes a little like this:

Method: Shake all ingredients with ice and strain into a chilled cocktail glass. Garnish with a flamed orange peel. slàinte.

And now…
Our Drink of the Week: Calera Ryan Vineyard Pinot Noir 2012
There’s a lot of reasons to like Calera. Their great, terroir-driven Pinots, of course, would be one of them. But, the thing I really dig about this winery is that they’ve completely charted their own path, far away from the noise of California’s primary wine regions, in an area of California most of us have never heard of (San Benito County… ring a bell?)

Calera’s Ryan Pinot Noir comes from the winery’s Mt. Harland vineyards in the Gavilan Mountains east of the Monterey Bay. At an average elevation of 2,200 feet, it is among the highest and coolest vineyard sites in California. The wine screams of its tough mountain roots; burly, big bodied and almost hedonistic. There’s dark fruit, black cherry and cassis, with sandy tannins and massive structure. If you like the bold and beautiful, Calera’s Ryan Pinot will do you right. 91 points