6 Years of Beer and Bourbon: The Changing Landscape of American Booze

I’ve been writing about drinks on this website for over six years now, but I’ve been on a little hiatus recently. I apologize for the inactivity, but fear not, I haven’t stopped drinking (I mean, tasting alcohol).

What the past few months of not writing, however, has allowed me to do is take a step back and start to process the massive growth and changes we’ve seen in the drinks industry since I launched this website in January of 2011.

When you stop and take it all in it’s really pretty amazing.

Without a doubt, the two largest shifts over the past six years have been the explosion of craft beer and the explosion of American whiskey. If you’ll indulge me, I’d like to take a quick stroll through memory lane, and look back at these drastic shifts, and discuss a few things that I see happening in the coming years.

Let’s start with Craft Beer.
At the end of 2010, right when I was starting to build this WordPress site, there were 1,759 breweries in America. That was a pretty big number back then… the likes of which hadn’t been seen since pre-prohibition times.

The craft beer industry was already in the process of a major upswing, but no matter how impressive those numbers seemed six years ago, they pale in comparison to what we’re looking at now.

In 2010, total sales of craft beer were about $7.6b, with approximately 10 million barrels sold. Craft beer represented 7.6% of the US beer industry in terms of retail sales by dollars.

By the end of 2015, Craft brewers were producing nearly 25m barrels (and that number continued to grow in 2016), with a retail dollar value of around $22.5b. That equates to a 21% market share, versus the 7.6% market share only five years prior.

I have a store in my neighborhood that has seen the craft beer section go from one shelf in 2010 to taking over nearly 1/3 of the store. Stacks of 16oz cans crowd the main aisles—you can barely get to the cat food anymore!

The IPAs are way hoppier now, the barrel-aged beers are a dime a dozen. Heady Topper is hardly the best IPA in the world anymore. In fact, there are dozens of other IPAs that are as good if not better in New England alone.

Styles like Gose and sour ale are booming. 22oz bottles are being replaced by cans and small-format bottles. I’ve never heard of a quarter of the breweries I see in the store these days (and I follow this subject pretty damn closely).

And to top it all off, I now have about a dozen local breweries I can drive to within a 30 minute radius. 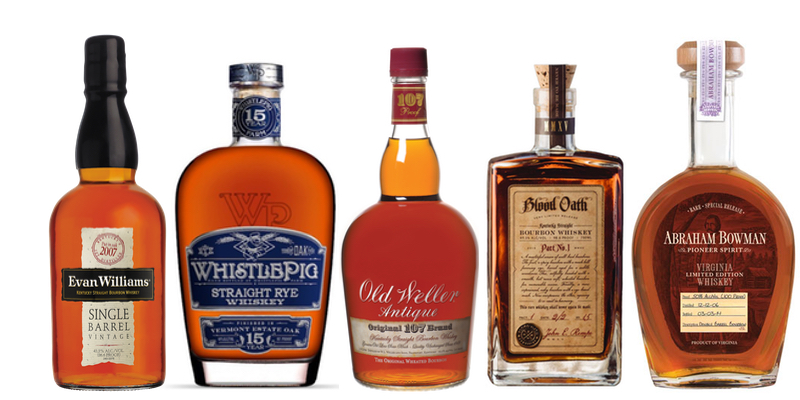 A Whirlwind of Whiskey.
Although the growth of spirits hasn’t been as broad reaching in the US as it has been for beer, the explosion of the whiskey aisles and craft spirits industry over the past six years has been nothing short of impressive.

In 2010, you could pick up a bottle of Pappy Van Winkle or Buffalo Trace Antique collection on the shelves, fairly easily. Trust me, I did it many times.

On the other hand, finding a decent selection of craft spirits was almost unheard of. Now, the Bourbon industry has gone through years of shortages and has ramped up production across the board, and craft distilleries are popping up all over the place.

The American whiskey category has been on fire. By the end of 2016 it had reached over $3b in sales by volume.

By sheer numbers, craft breweries have been taking over America in greater force, but percentage-wise, the growth rate of craft distilleries during this timeframe is actually moving at more than twice the speed.

Again, hearing the numbers is one thing, but watching things change first-hand is another. If you’ve been a whiskey consumer over the past six years you’ve seen this explosion take place right before your eyes.

You’ve seen brands that you never would have thought become hot commodities—like W.L. Weller and Elmer T. Lee—turn into cult fascinations. You’ve seen retailers crank up, and up, the prices of these hard-to-find bourbons. You’ve seen a secondary market for overpriced whiskey arise. You’ve seen craft distilleries start to come into their own, and start to put out some great products. And, in general, you’ve just seen more and more (and more) people jump onto the whiskey bandwagon.

Quite a difference a few years makes!

I’ll tell you one thing, all of this growth and these changes have made writing this website a whole lot of fun.

Looking Forward:
I’m not sure what the next six years has in store for us. But I do have a few thoughts…

I believe that people’s palates are getting better and their expectations are getting higher every year. Add to that a continual increase of supply and competition, and there’s no doubt in my mind that we’re going to see sub-par breweries and distilleries fade out. With this many options on the table in both categories, you better be producing some good juice.

I believe that local will become a major factor. More producers will opt to serve and focus on a local market and more consumers will look to their local producers as their go-to source.

I believe that people’s willingness to shell out big dollars for premium and hard-to-find products will not stop.

I believe that cans will become even more prevalent and that large-format beers will start to subside.

I believe that we’ll see more collaboration and synergy between breweries and distilleries.

And, finally… I believe that, even though there are nearly 7,000 breweries and distilleries in America now, more and more people will decide to start craft breweries and craft distilleries of their own. Some for the right reasons, and some for the wrong. And we as consumers will keep these people in check.