Remember five years ago when Heady Topper was the ultimate east coast DIPA? The New England “whale” that was sought after by every hophead from Burlington to San Francisco… 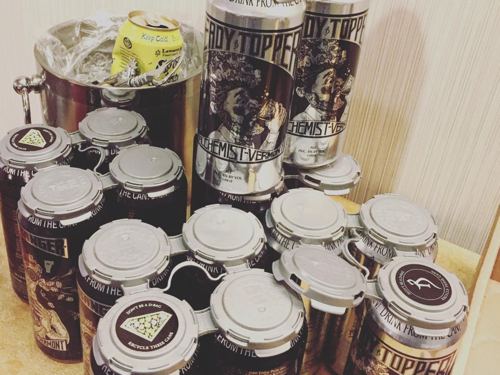 It’s amazing how seemingly normal Heady seems these days. With super hopped up, well made DIPAs fairly easy to find, Heady just doesn’t seem as far above the rest as it used to be. In fact, I could probably name at least a dozen DIPAs in New England I’d rather drink than (or be just as happy to drink as) Heady Topper.

Sure, there are plenty of craft beers out there that are still super rare and hard to come by. And people still clamor for them. Like Bourbon County variants, for instance.

But those examples are becoming less common. I say, if you’re a craft brewer, and you’ve got a few whales in your portfolio, now’s the time to release them into the wild. While they still have buzz around them and while they still have “whale status”.

I mean, don’t go produce them in mass and make them widely available. Be smart about it. But, milk them a little more.

If you look around craft beer today, it does seem that more breweries are getting smart to this idea. They’re making their best beers more available…  by canning them, or by upping the production, or by widening distribution.

It’s the only way to compete today. Play ALL of your aces.

It’s good for business and good for consumers. You make more money, we get easier access to great beer. The idea of the whale is diminished and beer is brought back down to being, well… a beer. 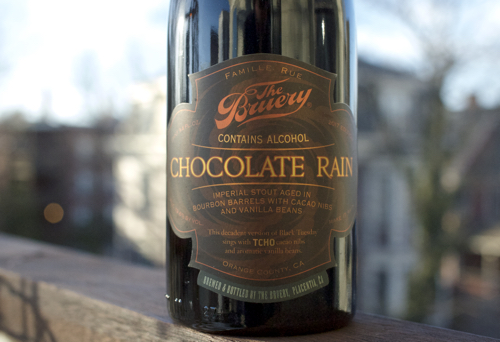 So, who is the latest to get smart and release their whales into the wild?

This week, look west to Orange County’s The Bruery. This nearly decade-old brewery has a number of whales in their portfolio and this Friday (3/24/17), they’ll be making one of these —Chocolate Rain—available to the public for the first time.

Chocolate Rain is a top 250 beer on Beer Advocate’s best beers list (it currently sits at around the number 150 spot). It’s a 20% imperial stout, aged in bourbon barrels with cacao nibs and vanilla beans. And it retails for about $40.

It’s pretty damn delicious. And in its large format bottle it’s apt to knock you on your ass. (So, maybe, share?)

Up until now, Chocolate Rain had been exclusively available to members of The Bruery Reserve Society, in extremely limited production.

But Friday, at 10am PST, the general public will have an opportunity to purchase the beer for the first time.

And I say, good on ya Bruery! Let those whales free! Let us drink.

Interested? Visit TheBrueryStore.com at 10am PST on 3/24, or go to one of their tasting rooms at noon (The Bruery Tasting Room and Bruery Terreux Tasting Room).