Beware, Session Beer Drinkers on the Loose in Massachusetts

Edit 7/25, 12:45pm: Rumor has it that the ABCC may not have called this Cambridge bar out on trying to host a liter beer party, after all, and that there were no laws in question. The ABCC claims that it was a hoax. That said, I don’t know who to believe, and irregardless of this particular incident, there are still plenty of archaic alcohol laws in MA that need to be addressed. Thus I’m leaving this article as is (only with this short edit as a precaution).

Massachusetts, home of the most annoying Bud Light-drinking sports fans in the world, made a fool of itself yet again when their alcohol regulators came down on a Cambridge bar last night that planned to serve mug liters of Notch Session Beer on their patio.

Let me break that down for you in a little more detail and in a non run-on sentence. The Alcoholic Beverages Control Commission of Massachusetts is all up in a tizzy over people drinking somewhat “oversized” (to their standards) pours of low alcohol craft beer at a bar next to MIT. Right, because if there’s one place you’re going to find law breaking drunkards it’s at a smaht people’s bar paying craft beer prices for a beer that rings in at a whopping 3-4% ABV. 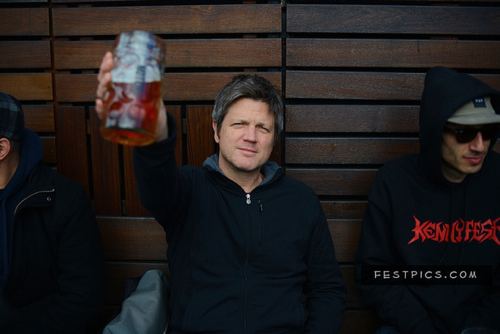 You know, Massachusetts, you got my hopes up last week when you chipped away at that archaic law banning wineries from directly shipping to customers in the Bay State. That was really cool, I gave you a hat tip. But now you go and do something as asinine as this and I just want to pluck my eyebrows off and pour mug liters of Bud Light all over your Beacon Hill lawn so that Boston area frat boys will swarm the State House like piranhas on a pig. Then maybe you’ll realize who to keep your eye on because they’ll be sitting right there, on your lawn, with their backwards Red Sox caps blocking your view of the park, the smell from their yellow swill beer tainting your lunch hour.

I’m sorry. I don’t mean to rant. I’m just a little frustrated. And I can’t possibly imagine how Notch’s founder/brewmaster, Chris Lohring, feels. In today’s Boston Herald article, Regulators foaming over liter beers, Chris was quoted as saying, “You can get a pint of beer with 10 percent alcohol in this state no problem, but you can’t get a two-pint serving of beer with 4 percent alcohol. It makes no sense.”

No, Chris, it does not. It makes absolutely no sense whatsoever.

I understand Massachusetts is trying to protect their precious no Happy Hour laws, but when you shine your light on beneficial social events like celebrating traditional Bavarian culture with low alcohol beer, it just makes it more clear how stupid these laws really are. And furthermore, it points out how much city/state resources are being wasted on trying to go after the wrong things.

The Boston area is coming out of its shell and trying to become a truly forward-thinking place for culture and social activity. But it’s these archaic perspectives and laws that continue to throw up hurdles for good things to happen more freely. I give credit to organizations like Future Boston Alliance and Free the Grapes, or people like Lew Bryson and even the new mayor of Boston (it seems) for advocating for change in Massachusetts and the broader alcohol landscape around the country. But there’s still a long way to go. And this little session beer event shenanigan makes that abundantly clear.

Do me a favor, if you’re in Massachusetts, get involved in the proactive efforts that are taking place to break down some of these old barriers. Even if that just means sharing an article or two.